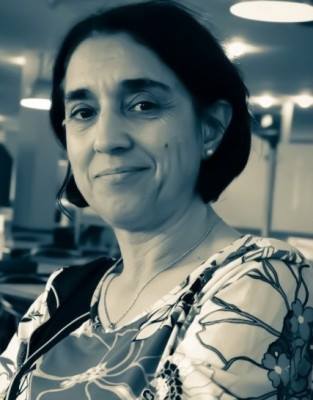 Bayan Salman was born in South Kurdistan but lives and works in Paris. She is also a journalist, academic feminist and author of several novels, poetry collections and translations. She has written in Kurdish, Arabic and French.

Born in 1961, she is from one of the cultural families in Kirkuk city and graduated from Baghdad University with a degree in political economy. Before moving to France in 1998, she worked with NGOs since 1991 in Kurdistan.

She was part of a group of Kurdish women, including Choman Hardi, and Najiba Mahmud, who in 2012 founded Women’s Era (Sardmi Jin), one of Kurdistan’s first feminist magazines. She has since written several articles on feminist issues.

Best known for her novels and essays, Bayman’s style has been influenced by modern French literature.  In her novel The Ancestors of Madayie, she uses her trademark style to write about the beginning of civilization and the start of cultural, social and racist conflicts.

Her Kurdish novels include The Ancestors of Madayie (published in 2011) and Adam`s Nights (2015). In Arabic she has written a novel Boraq (published 2008) and the poetry collection, I am like in Fairy Tales (2006). Her translations Arabic-to-French and French-to-Kurdish, include works by Voltaire, Patrick Modiano, Ovid’s Metamorphoses (to be published 2016), and the poems of Mallarmé and Paul Valery.

Other research and publication published: