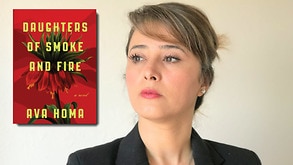 If you run into Ava Homa on the street, you would notice her. She has a cheerful disposition and comely face. If you were craving a cup of coffee, you would wish she were your barista or even better, you had a chance to engage her in a tête-à-tête. But it would be presumptuous of you to take her for a lightweight or pity her for her lot.

Others may have family, friends, or even governments at the ready for the “slings and arrows of outrageous fortune,” Ava has her tongue. Take it from me, you don’t want to mess with Ava!

With words at her disposal, she can slice your throat sharper than a barber’s razor! Mercifully, she uses them to confound the destroyers of Kurdistan. If you have nothing against her fellow Kurds, Ava is a friend you want to have on your side.

She is a professional author and writes the way a duck takes to water. Her debut novel, Daughters of Smoke and Fire, is receiving rave reviews and deserves a prominent spot in your study for your leisure hours.

Between its pages lies a story of Kurdistan. You can own it for the price of the book.

Yes, you read me right: a book that will gift you a country and forty million Kurds who are fighting against overwhelming odds for a place of their own under the sun!

Persian, Turkish and Arab ruling circles have the title to Ava’s homeland, but in the book, you will come across its indestructible spirit, its music that outlasts tyrants, its sublime poetry and its exquisite cuisine while spending quality time with three of its precocious children, Leila, Chia and Shiler.

They are Ava’s creations, flowers if you will. In fact, Shiler is the name of a particular flower in Kurdish and covers the American edition her book.

Leila, Chia and Shiler think in Kurdish, but address each other in flowing English. The first falls in love with a pen, the second a camera and the third a gun.

They come of age in Kurdistan, Iran.

Leila is the protagonist. She comes across as a firecracker. She is not into clothes, nor interested in boys. Life has saddled her with another challenge. Her father is a torture survivor. Her mother is a goofy counsellor. She is expected to be a submissive type.

She adamantly rejects both options.

She will chart her own course. She will fight for her rights. She will be her own agent of success or doom.

Her first battle is against men who worship the past and are afraid of the future. Her second is against the dominant caste, the Persians who practice something out of Orwell but attribute to God, “All animals are equal, but some animals are more equal than others.” Fighting is not without its costs. “Growing up is a trap,” admonishes Grandma from the past.

Leila grows into a spunky and feisty girl. Trotsky might have said, “She has come before her times.” The Kurdish youngster has never heard of the Russian revolutionary. But she will dare the status quo, come what may, as he did.

For example, she experiments with “dating” on a lark. She goes to the city district where “available men” congregate discreetly. She has to watch out for the morality police of the Islamic Republic of Iran. She runs into her dad. She dissembles and abandons the place as if it were the birthplace of coronavirus.

If the daughter of a torture survivor and a goofy counsellor will challenge the established norms that limit a woman’s place in society “by any means necessary,” her brother, Chia, has a fascination with documenting human rights violations by the dominant caste with the help of his camera.

He does so in Tehran but is caught in the act. He is accused of “enmity against God.” The Ayatollahs think highly of themselves. If the merciful God is resting in his heaven, his merciless self-appointed representatives are busy on earth and will crush anyone who second guesses their misrule.

They seem to zero in on Kurds and other minorities. They detest activists who equate freedom with human rights. They think ideas can be locked up the way a bird can be caged or trapped. Chia will be hanged as his father was tortured. The enormity of the verdict hits Leila like a ton of bricks.

She decides to rescue her brother.

It is hopeless task.

The representatives of God do not give in to protests. They let Leila go through the motions of appealing their decision, but torture Chia just the same. We find out that the guards sometimes play with blindfolded Chia like a soccer ball. If that is too monotonous, he becomes their boxing speedball.

Leila is at her wit’s end. Chia’s smuggled letters come to her aid. A quote from one of them, “A mountain begins with its first rocks and a human with its first pain,” doubles down her efforts.

I could go on, but I would be giving away the plot. Suffice it to note Chia’s first love, the camera, in the able hands of Leila, performs a miracle towards the end of the book. Shiler, the character that fell in love with the gun, and her friends take on the ISIS cutthroats and enable the world to take a deep sigh of relief.

Since I love coffee, I will make one more reference to the beverage and its servers. Leila immigrates to Canada to be with freedom and its blessings. While learning English, she works at a coffee shop as a barista. Next time one makes you a coffee, make sure you have your copy of Ava’s book with you. If you get a chance, recommend it to her/him!