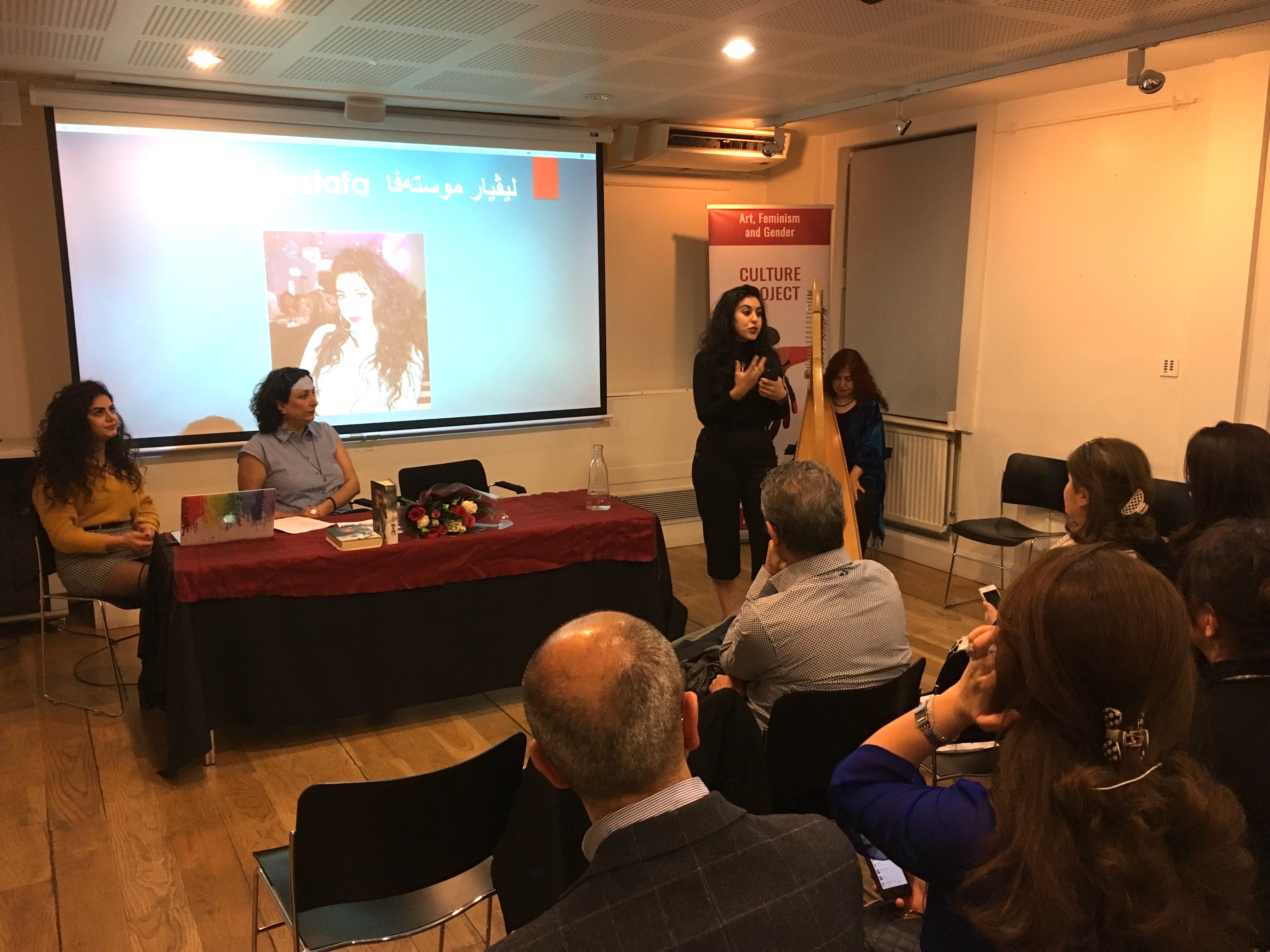 On the 8 December 2018, Culture Project organised an event in Pushkin House, in London. It was an evening for Kurdish novelists, poets and musicians, which included poetry readings, music and a book launch.

The evening began with Houzan Mahmoud’s introduction on the position of female writers in Kurdish Art and literature and the importance of making spaces for such creativity. She elaborated on the importance of listening to powerful female voices in writing, poetry and music that offer insight into the hardships, successes and everyday experiences of generations of Kurdish females.

Houzan then introduced Bayan Salaman, reading a short biography covering her body of work. Bayan Salman is a Kurdish female novelist. She holds a master’s degree in French literature and lives in Paris. She wrote many novels and essays in Kurdish, Arabic and French, and she published her Kurdish novels in Kurdistan (KRG).  She is on the editorial board of Culture Project, and her work has been featured in the magazine, both in online and print versions.

After this short introduction, Bayan Salman read passages from her new novel, The Memory of Perfume and Fire. Bayan then elaborated on her work and stylistic choices.

The novel centres on women in the Kurdish city of Kirkuk, rich in oil reserves, but poor in infrastructure and living conditions. The novel sheds light on the plight of Kurdish women, who face not only the personal challenges of domestic violence and patriarchy, but also those from the broader Iraqi government, which has long sought to subdue the Kurdish populations through forced Arabization and displacements.

The novel is about many aspects of life in Kirkuk. It is about the perfume, from which the novel draws its title, offering meaning and beauty in these women’s difficult lives. It is also a novel of fire, of terror, of conflict between a despotic government and the people living under it. It is a novel about the city of Kirkuk, in which the first thing a person sees when he drives towards the entrance of city is fire, which looms high and burns continuously.

Once Bayan Salman finished presenting her novel, she took questions from the audience. The question most asked concerned the position of the Kurdish woman as a novelist, Bayan’s novel, its atmosphere and historical aspects.

The second part of the evening opened with Tara Jaff, famous Kurdish harpist. After her performance, young poet Palina Saman read her poetry in English. With her poetry, Saman challenges the old traditional Islamic values, which associate a woman’s body and virginity with her family’s honour. The poem provided a female voice against all those values that hold women as objects and limit their freedom to live as autonomous human beings.

The third part of the evening was also a poetry reading in English. Liviar Mustafa’s work expresses her anger against the honour killing of Kurdish girls. In her poem, she criticizes the father, and all members of the family who chose to stay silent when the girl faced death.

Her voice is part of a third diaspora generation who desire to live differently, with new values of gender equality and freedom.

After the music performance and poetry readings, there was an open discussion about values in Kurdish and Middle Eastern societies. The role of parents in challenging centuries-old traditions was discussed, as well as the importance of giving space to new generations to express themselves freely.