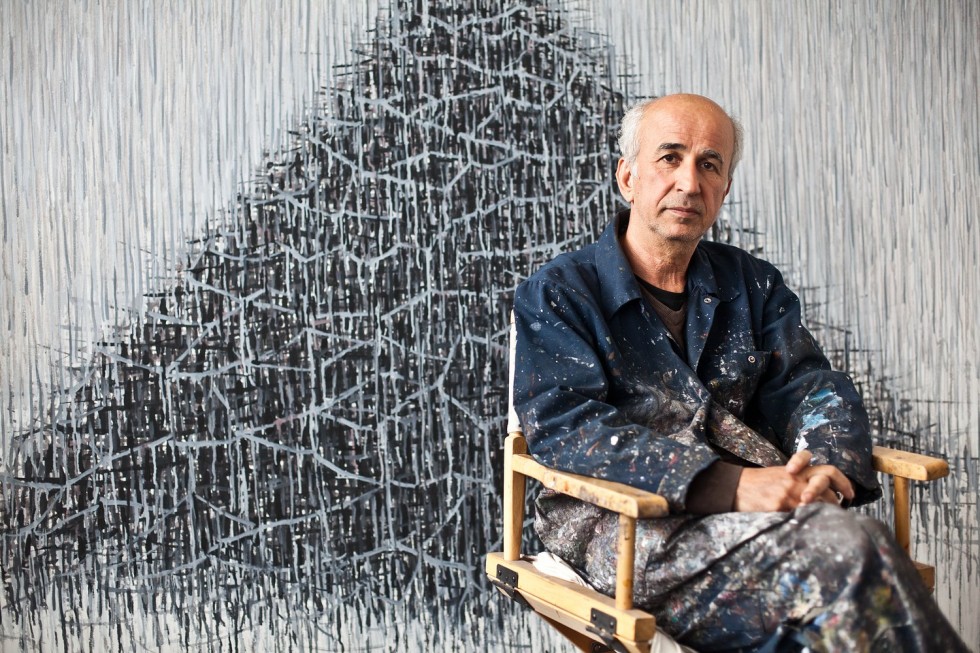 Scott Douglas Jacobsen: You are an artist. What was family and early personal life like for you?

Walid Siti: I am born in the city of Duhok, which is in Iraqi Kurdistan.  High and ragged mountains surround the place. I was brought up in a family that has been politically conscious/engaged.

My father was involved in trade union activisms. That has put him in lots of terrible. It led him being most of the times in prison or on the run from the authorities. That meant the authority figure of the father was absent.

A father in our society is traditionally the breadwinner for the family. Ours was absent. The family suffered from poverty and lack of resources. To make ends meet, it was demanded from my mother, sibling, and I to work after school and during summer breaks.

Thus, I grow up in an environment marked with images of war and violence; warplanes, sound of artillery, and burning mountains, all that can be mastered by an oppressive dictatorial regime.

A few security henchmen ruthlessly controlled the entire city with draconian laws, marching armies (Aljaysh al Shaabi) who were chanting war slogans on the main roads, and tanks were rumbling in small alleyways of the town shaking our fragile mud houses.

I managed, somehow, to finish my primary school and three years of intermediately school before travelling to Baghdad to join the Institute of Fine Art in 1971. It was the only school at the time that specialised in offering art training for youth in Iraq.

Not being able to continue my art study at the Institute of Fine Art in Iraq because I was not a member of the rolling party, the same set of personal political circumstances made me pursue my art study abroad and independently.

In 1976, I ended up in the academy of art in Ljubljana, Slovenia, which is part of ex-Yugoslavia. One of few study escape route available. I never returned to Iraq until the creation of a safe haven in the Kurdish area after the mass exodus resulting from the crushing of the uprising by Saddam’s regime.

Jacobsen: How does your own background inform your art?

Siti: The upheaval witnessed had a major impact on the life of everyone, especially for those who were on the opposition camp. Those who dared to differ or not fall flatly in the line of authorities’ ideology and practice.

As a Kurd, who came from a small community that suffered immensely, it developed in me a deep feeling of injustice and hopelessness. It created in me a sense of affinity with all other causes calling for justice and basic human rights.

Thus, I always saw it and still see it as an inseparable part of today’s universal struggle of all those who are deprived of their rights striving for justice and peace.

My work navigates a complex terrain of memory and loss, while at the same time trying to allude to a world, which for me has been a place of constant change.

The narrative of a life lived far from but still deeply emotionally connected to the place of one’s birth. Exploring themes that deal with ideas related to heritage, identity, boarders, and mobility, these themes have had an imprint on my outlook and contributed to shape my art and life.

In that regards, my work has developed from a period of emotional and direct expression in the 1980 and 1990s to a more settled, contemplative approach. Living and practising my art in a new space had a major impact on my work, it offered me the opportunity of a different perspective – in terms of perceiving my ideas and understanding my mediums and materials in way of trying to attain my perceptions.

Jacobsen: Your artistic productions are abstract. How dis this become the form of self-expression for you?

Siti: I do not see it that way. I do not think my work is abstract. Apart from a short time of experimentation decades ago, I have never been interested in abstract art. My work after a period of emotional engagement moved towards a sort of paring down in term of details and composition.

However, I was always interested in subject matter. I always believed in an art that has something to say or to question and attempting in finding a way of conveying that.

My work from the war series from 1986-1992, which was etching and drawings on paper. Also, another series of work from 1997-2010 on themes of precious stones, family ties, mountains, and towers all evolving around exploring ideas related to identity, social and power structures.

My recent work of last ten years or so manifests those ideas further engaging in ways of dealing with themes of migration, boarders, militarisation, and violent conflicts.

Jacobsen: Your works have the structural appeal and aesthetic simplicity of a set of ladders. Also, the color scheme is more basic, e.g., browns, whites, and blacks. How do these convey your intended message if any?

Siti: The construction can symbolise something you climb to achieve an end. I have an interest in ancient buildings and monuments of the Middle East – not for nostalgic reasons, but rather to understand the subject in its historical context with hopes of shedding some light on our current history/situation.

I am interested in layering shapes like building blocks. I begin each work with a broad base and slowly build layers up to form a peak. This repeating structure is a metaphor for the organisation of society and hierarchy of power.

Natural shapes like mountains and architecture from the cultural heritage; pyramids, ziggurats, or minarets exhibit these ideas. It demonstrates like a stratified social structure, starting with the family and peaking with the military.

The ladders used as a metaphor to evoke the sense of tragedy and mass movement. The delicate structures formed by hundreds of ladders stacked on top of one another to convey the shaky and insecure struggle in ascending alone, stepping into unfamiliar terrain and entering a new social set up.

The ladder acts as a link. Thus, it has the capacity to connect between a state of almost non-existence to a potentially new domain of reality where one’s dreams and aspirations can be realised.

The colours of ochre, black, and grey align with the general theme of my work that everything – the two extreme opposites balance of nature – is always black and white. I find that these dichotomies reflect themselves in my work as only two options with shades of grey.

Jacobsen: Any final thoughts or feelings in conclusion? Any upcoming projects?

Siti: I have been invited by Framer Framed to take part in a group exhibition titled Public Art Amsterdam 2018. That opens on 22 June and runs till October.

The project is collaboration between a variety of art institutions in Amsterdam (among others Stedelijk Museum, De Appel, Rietveld Academy, Oude Kerk). The institutions join forces for a big art event that explores the potential and possibilities of art in public space by placing new works – in relation to existing works

My work titled “monument to the unsung 2018” will be installed in the north of the city on the other side of water front opposite the main railway station.

Below is statement/Press release for my project:

Walid Siti, Monument to the Unsung, 2018

In this work Walid Siti subverts the concept of the cliché “Monuments for the Unknown Soldier” into a “Monument to the Unsung”. The work questions the way in which males are remembered as heroes by the establishment in various forms of commemorative manifestations, whilst women often remain unrecognized and lack visibility within public space, as well as public debate.

With this work Siti offers a reconsideration of the notion ‘hero’ by creating a monument for women. The work insists on acknowledgment for the role of women within present-day society and serves as a testimony to their (often unrecognised or undeclared) strength and accomplishments.

The piece takes the shape of a pyramid, or a tent, and is comprised of approximately fifty-five blocks engraved with common Kurdish female names. The artist was born in the city of Duhok, in Iraqi-Kurdistan, a region marked by war and conflict for the past decades. Each block carries a different name, with their meanings derived from nature, like كانى (Kani), which means spring, or روناهى (Ronahi) which translates to light. It serves as a tribute to women, and more specifically, to the strength of the unobserved mothers, sisters, daughters and wives, who deal with the brunt of wars and conflicts and face trauma, displacement, loss and humiliation as a consequence.

My other upcoming project is to take part in a major group show in Yerevan, Armenia. The exhibition titled: Armenia 2018. Contemporary Art Exhibition”

I am excited about this project as I feel it is somewhere closer to home as we share so much with Armenia in terms of history, politics, and culture.