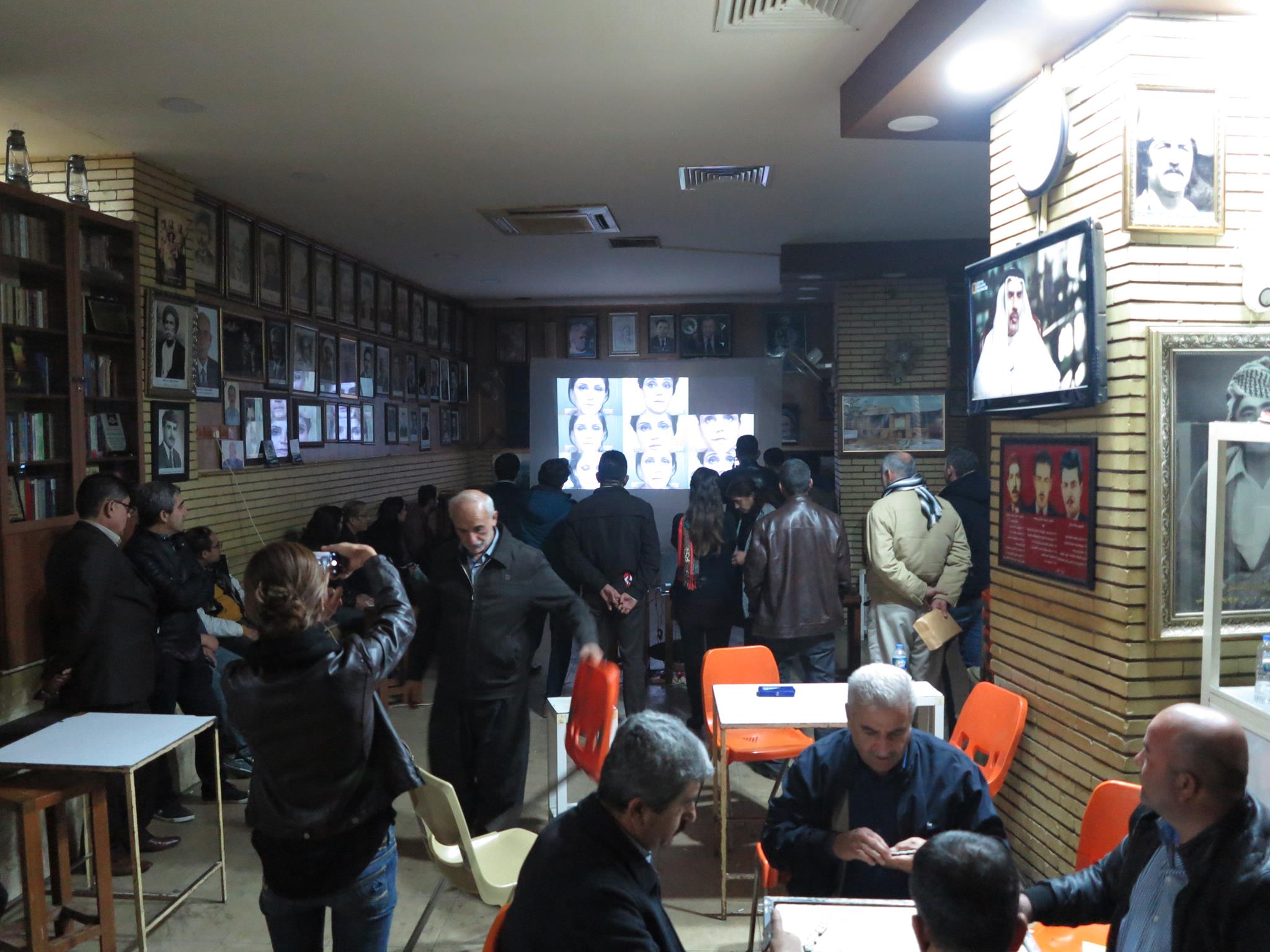 Feminist art presentation at a traditional tea house in Kurdistan

Rozhgar Mustafa is not only an artist, but a feminist and a conceptual artist, whose vision of the world is one in which women are accepted as equal human beings. Through her art she conveys important messages about the status of women in Kurdish society. One of her recent art projects amongst other things, capture some of the themes that underpin her motivation for creating art.

One of Rozhgar’s recent art activities include a stirring form of Video Art which was shown at the oldest Tea House in the city of Sulaymania, a Tea House called ‘Shaab’ (which translates as ‘Nation’). This tea house is a traditional place where men meet, socialise, and play Backgammon and Dominos.

Being so laden in themes pertaining to, and catered for, men, the place gives off a brusque welcoming for any women curious to enter… Rozhgar’s concern is not only this aspect of the tea house, but she also concerns herself with how to both engage them in conversation and to motivate them to show forms of video-art there. This is no easy obstacle because it would necessarily transform the atmosphere to such an extent that it would be at odds with the kind of ambience with which the Tea House has come to identify.

The art activity consisted of two Video Art products, one of them is called ‘I am similar to my father’, and the other one called ‘I sacrifice for you’. Two big screens were placed within the Tea House and on them are displayed a woman who oscillates back and forth from speaking to singing, as well as displaying her overtly gesticulating and, more broadly, making various decorative bodily expressions – amidst a very crowded Tea House, of course.

In the ‘I sacrifice for you’ video, one woman is shown pensively stirring a cup of tea over a newspaper featuring an article entitled ‘A woman is killed by …

The principal aim of Rozhgar’s work was not only to show her art in a place that is overtly dominated by men, but it was to overthrow the conventions of such a place by imposing herself as well as her work within it. Furthermore, it was clearly Rozhgar’s aim to gain entry in the Tea House in order to engage in conversation with those men who spend significant amounts of time in such places in order to learn and (ostensibly change) their views.

This piece of Rozhgar’s art aims to change the atmosphere of convention by challenging the iniquitous values that harbour inside it – something clearly crystallised (if not just localized) by her own attempts (and success) to introduce her own artistic activities, as a woman, within it, a place situated at the very heart of the town of Sulaymani.

The message that her art sends is clear: women can beget forms of artistry through talent and hard work, women have a voice, women have a vision, and women deserve the same kind of recognition and respect that men are recipients of. What is more, society can change, to whatever extent, when challenged through female self-empowerment.