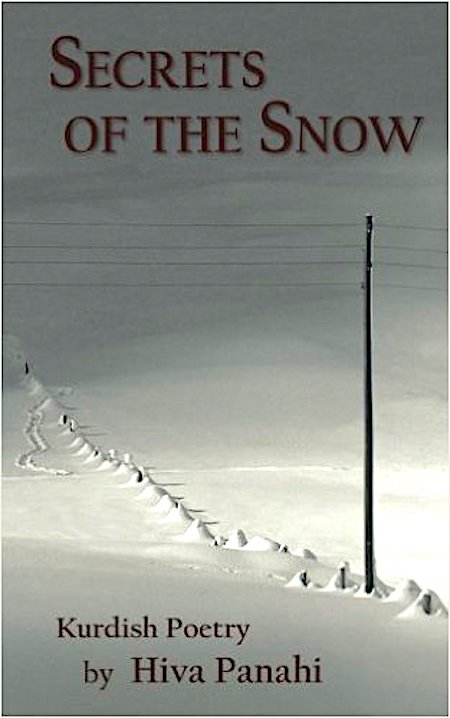 Secrets of the Snow

Please join us to congratulate Dr. Hiva Panahi! The debut English translation of her celebrated collection of poetry, Secrets of the Snow,  published this October by Hard Ball Press in New York City.

SECRETS OF THE SNOW – Transformational poems of liberty, exile, and love. Award-winning poet Hiva Panahi was first published at the age of thirteen in her native Kurdistan in today’s Iran. Her early involvement with culture and social justice led to persecution by the Iranian government and exile to Athens, Greece. With a lyrical subtlety and gentleness, she transforms pain and loss into a depth of feeling for humanity and nature, the true essence of love, and the rays of hope on the horizon.

About SECRETS OF THE SNOW

This is Dr. Hiva Panahi’s debut book in the United States and is the English translation of her celebrated collection of poetry from her previous publications in Kurdish and Greek such as The Lost Earth, Nest, You Are a Sun in My Eyes, The Red Stone, The Point of Fourteen.

Karen Van Dyck, the Kimon A. Doukas Professor of Modern Greek Literature in the Classics Department at Columbia University, has chosen Dr. Hiva Panahi’s three poems – Companion 1996 Kurdistan, The Breath of the Olive Tree 2006, Athens, as well as A Man of Ashes 2006, Athens – for her new book Austerity Measures: The New Greek Poetry (Penguin Random House, 2016).

Dr. Hiva Panahi was born in 1980 in Sanandaj, Kurdistan, located in today’s Iran. Her first poem appeared in the Kurdish magazine, Serwe, when she was thirteen. At age sixteen she started a movement against the Iranian theocratic oppression towards women, for which she was imprisoned and tortured.

In the year 2000, she took refuge in Greece on a scholarship to study at Panteion University and at the University of Athens. She has translated Aeschylus’ Prometheus Bound, Aristotle’s Politics, and Susan Dunne’s Interviewing Techniques for Writers and Researchers into the Kurdish language. A collection of her poetry, Secrets of the Snow, was published in 2001 in Kurdish and in 2008 in the Greek language. In 2011, she received the honorary award for poetry at the International Festival of Storytelling in Kozani, and in 2014 was invited to take part in the Tinos Literary International Festival. She is a doctor of social and political sciences at Panteion University and has worked at the Panteion University with the renowned Greek professor Neoklis Sarris and the famous Greek poet Nanos Valaoritis who is the most important poet of the Hellenic diaspora since Constantine Cavafy, Emeritus professor

You can purchase Panahi’s book from Amazon: