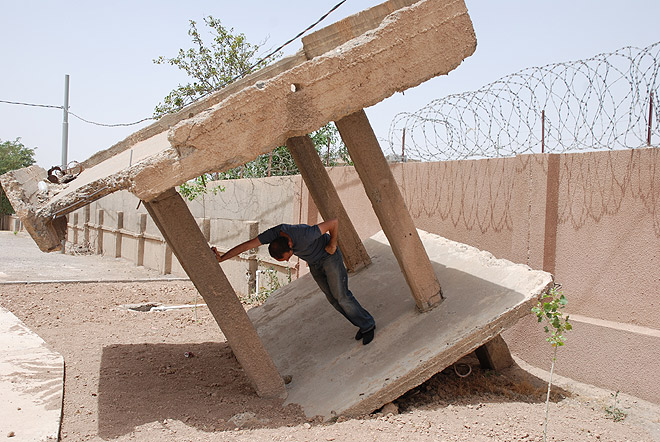 Iraqi-Kurdish artist Hiwa K was born in Kurdistan (Northern Iraq) in 1975. His early studies focussed on European literature and philosophy, learnt from available books translated into Arabic. Emigrating to Germany 20 years ago, Hiwa K quickly found that 14 years of his work, influenced by the study of European Modernism and Socialist Realism, carried an insuperable irrelevance to contemporary art practices. Disenchanted, Hiwa K abandoned visual art and took recourse in flamenco under the Spanish legend Paco Peñ.

Later, Hiwa was accepted by the Mainz Academy of Arts with a portfolio he borrowed from a friend. With little interest in the curriculum, Hiwa’s aim was to query and challenge the Western art education system and commence his own artistic projects which came from key alliances with other students and staff.

Calling himself an “extellectual,” Hiwa defines himself as someone who has procured knowledge from the streets, in coffee shops, through conversations, and exegetical and hermeneutical engagement with books. Dialogue, learning and the dissemination of knowledge are still received as a central role within Hiwa’s work.

Hiwa K’s work evades normative aesthetics and confers newfangled vernacular forms, oral histories (Chicago boys, 2010), modes of encounter (Cooking with Mama, 2006) and political situations (This lemon tastes of apple, 2011). The repository of his references consists of stories narrated by family members and friends, found situations as well as everyday forms that are the products of pragmatics and necessity.

Critiquing the education system and the professionalisation of art practice – as well as the myth of the individual artist – is still a salient feature of Hiwa K’s work. Much of Hiwa’s work embodies a collective and participatory dimension, and it discloses the concept of knowledge-formation from mundane experiences rather than ethereal ( including religious doctrine).

The Bell, currently in Okwui Enwezor’s exhibition All the World’s Futures at the Venice Biennale, is arguably Hiwa’s most well-known work. The project came into existence after Hiwa’s encounter with a man named Nazhad, whose Iraq foundry melts down the waste of war. Taking 8 years, the work involves a dual-screen video. One side of the screen is the casting of a vast bell in a 700-year-old foundry near Milan, and on the other screen is a video documenting work with Nazhad in Iraq.

Hiwa K has been involved in various collective exhibitions including La Triennale in Paris and the “Edgware Road Project” at the Serpentine Gallery in London. Hiwa’s famous Chicago Boys project, from 2010, is continuously hosted by international institutions. Hiwa K participated in Manifesta 7 and the Venice Biennale 2015. In 2017 Hiwa will participate in a project for the Documenta 14 exhibition to be held in Athens and Kassel in 2017.