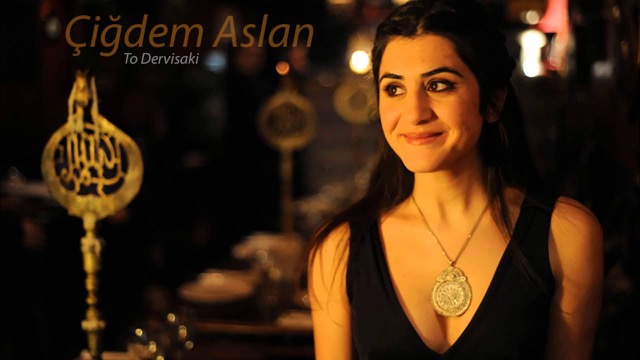 Çiğdem Aslan was born in Istanbul into a Kurdish-Alevi family of Sivas and lived in a heavily leftist neighbourhood of Istanbul named Nurtepe, attending middle school in the elitist neighbourhood of Nisantasi and then high school in the heavily Armenian, non-Muslim populated neighbourhood of Kurtulus. She has now lived in London for almost two decades, having moved there after deciding to study music in England. So, can she still be considered to be a Kurdish-Alevi musician? Or, to pose it differently, what are the criteria for defining someone’s relationship with his/her racial and ethnic group?

Çiğdem Aslan’s albums “Mortissa” (2013) and “A Thousand Cranes” (2016), both focusing on Rebetiko and Smyrnaic songs from Asia Minor and Greece mainly from the 1930s, received great reviews from all around the world, including in The Guardian, NPR, Songlines, fRoots, Evening Standard, New York Music Daily, entered the World Music Charts Europe top ten and stayed there for months. “Mortissa” was chosen as one of the best albums of 2013 by fRoots and Songlines magazine, with the latter nominating and shortlisting Çiğdem in the Best Artist category for Songlines Music Awards 2014. Singing in several Balkan and Caucasian languages including Turkish, Greek, Kurdish, Bosnian, Bulgarian, Romany and Ladido, performing Rebetiko, Sephardic and other ethnic music of Turkey, she underlines the pivotal elements of her Kurdish-Alevi cultural context. She also performs folk music from different regions of Anatolia with virtuoso Tahir Palali. She is a vocalist with Dunav Balkan band, established in 1964, and She’koyokh Klezmer Ensemble, making Jewish, Klezmer and Balkan music. Her fresh new single ‘Sabah Güneşi’ (Morning Sun) sung in Turkish came out just a few weeks ago on the Red Records label. Çiğdem Aslan’s voice has been described as “as sweet as a watermelon and as strong as demitasse of coffee at mid-afternoon” by the magazine Jazz Weekly as it is considered very rich, earthy, and penetrating. Such a perfect definition illustrating the waves in her voice when she sings regardless of the language.

I listened to Çiğdem for the first time in London in 2008 when she performed at a Yasmin Levy concert. It was mesmerizing indeed. In general, there is something mystical about discovering new voices and watching performances live for the first time. Çiğdem was no exception. Can anyone deny the fact that singing is not just about the voice? Isn’t it a performance art? Then a few years after Levy and her concert, I met Çiğdem again, this time in person in London when I randomly went to her antique shop. I do not think I even mentioned about our first personal encounter at her small antique shop when I met her several times for my project and documentary film a decade later. However, her big welcoming smile when I entered the shop is still in my mind. I hate describing someone as ‘humble’, especially a woman, as I think it connotes someone who is not considered a threat to social norms or someone who is not fierce enough to be insistent (I believe the overall system compels you to be an insistent person in order to achieve), so I am stopping myself using this adjective to describe my overall impression of Çiğdem.

Given the fact that she was once described as “both lioness and nightingale” by the English newspaper the Evening Standard, putting her in the category of ‘humble’ would be very unimaginative anyway. Also, witnessing her rock-solid effort in the traffic jams of London, ruthlessly seeking out alternative routes to enable me to catch my train to Brighton on a very cold January evening, using the word ‘humble’ first before other adjectives would be too restrictive. How is she then? The readers of these feature article series must have known by now that my second main objective with this series of portraits of women is to approach them as creating a ‘third space’ (not solely as a European or Kurdish in this case), giving insights into hybrid worlds by subverting the power relations and social norms by their cultural, political, aesthetic, or everyday practices from an overlooked angle if not their primary objective. Third spaces are the in-between, or hybrid, spaces, as the first and second spaces work together to generate this new, third, space.[1] I am enquiring about these women’s encounters across time and space, going beyond the clusters of binary cultural categories, opening up new sites between interlocutors, sometimes leading them to also feel caught in-between juxtaposed cultures. At the end of the day, life even in ‘third spaces’ is not a bed of roses.

Why did you sing very little Kurdish?

Given the fact that identities are not primordial but constructed, approaching her as a Kurdish singer is highly controversial and problematic in both theoretical and practical terms. Above all, she sometimes sings in Kurdish but only along other languages of Asia Minor, not solely because she is Kurdish. She says, “I have a Kurdish song in my second album as my Rebetiko album opens a wide window to all neighbouring cultures”. She links her musical talent with her cultural and family background, as “I come from an Alevi-Kurdish family, in which music has always been present, originating from Alevism. There were always some people playing tanbur or singing folk songs. My primary school was in Nurtepe, Istanbul, which is a place where mostly Alawites and leftists live,” she explained. One might naturally expect her to sing mostly in Kurdish or mostly folk songs. But she does not.

So obviously there is this common attitude towards her by Kurdish diaspora listeners at her concerts in European cities. Regarding her European concerts she says “I have a concert concept established beforehand that I need to stick to throughout my concerts. I sing Rebetiko, songs of Izmir, Istanbul, Athens. In a way I can say urban music. But the Kurdish audience wants to hear more of Kurdish which is outside the concept. It does not look professionally ethical to me to go outside the concert concept”. For sure, she would not necessarily be expected to sing in Kurdish if she had been living in Turkey. But she is expected to do so in Europe to preserve the vividness of ethnic culture in diasporic spaces.

When asked why Rebetiko or Balkan music, by rejecting the demand to choose one identity over another, as women are so often required to do in general, Çiğdem says “simply because I want to sing the songs that I enjoy singing”. When asked why she’s not singing in English as she does in England, she says “I cannot teach one’s grandmother to suck eggs. I think what matters is that you do what you are best at”. In fact, Çiğdem’s preferences in terms of her musical genre and the languages she sings in indicate how and where the question of ‘identity’ and the ‘self’ can be conceived differently, and lead to a crucial question:  Are we what we make of ourselves or are we what we are?

The Quest for a Third Space: Self-positioning in global-digital era.

While the theories of scholars such as Lacan and Žižek provide us with the tools for understanding the ‘self’ in relation to social, cultural and psychic processes, English sociologist Anthony Giddens in his book Modernity and Self-Identity makes a better argument, claiming that in the context of the post-traditional order of late-modern societies “the self becomes a reflexive project”,[2] in which self-identity is no longer seen as something that is given but appears as something that has to be routinely created and sustained in the reflexive activities of the individual based on his/her experience of personal and social change influenced by modernity and globalization.

Although questions have been raised about the empirical adequacy of Giddens’s analysis, his views have contributed to the idea that late-modern societies require a new kind of lifelong learning that is concerned with the ongoing in response to ongoing uncertainty and risk. This is not to argue with the fact that being in diaspora always and necessarily poses uncertainties and risks that a migrant, Çiğdem in this case, needs to tackle, because reflexive construction of the self is not only “caused by disturbing circumstances, or their threat” but can at the very same time “mobilise adaptive responses and novel initiatives”.[3] In this way she has found her unique voice in Rebetiko and Balkan music in Europe, a ‘third space’ which  provides her with the opportunity to construct self-identity without the shackles of tradition and culture, adapting to changing circumstances. She chooses to be associated with neither an English nor a Kurdish musical context.

Perhaps there was not much need to explain the positioning of Çiğdem towards her ‘self’ through Giddens’ theories, as her self-narrative is pretty self-explanatory. However, there can be no doubt that society and the self are both ‘in flux’ and one’s biography continually integrates events which occur in the external world and sorts them into the ongoing ‘story’ about the self as Giddens proposed. When I asked who she thinks she is, Çiğdem confidently and precisely replied, “when I announce my name on the stage before my concert, they describe me as ‘here you are, the singer Çiğdem Aslan, who is from Istanbul coming through Hackney! That is exactly who I am”.

[1] ‘Third space’ theory here relates to Homi K. Bhabha’s interpretation although it was conceptualised as a term by Edward W. Soja.