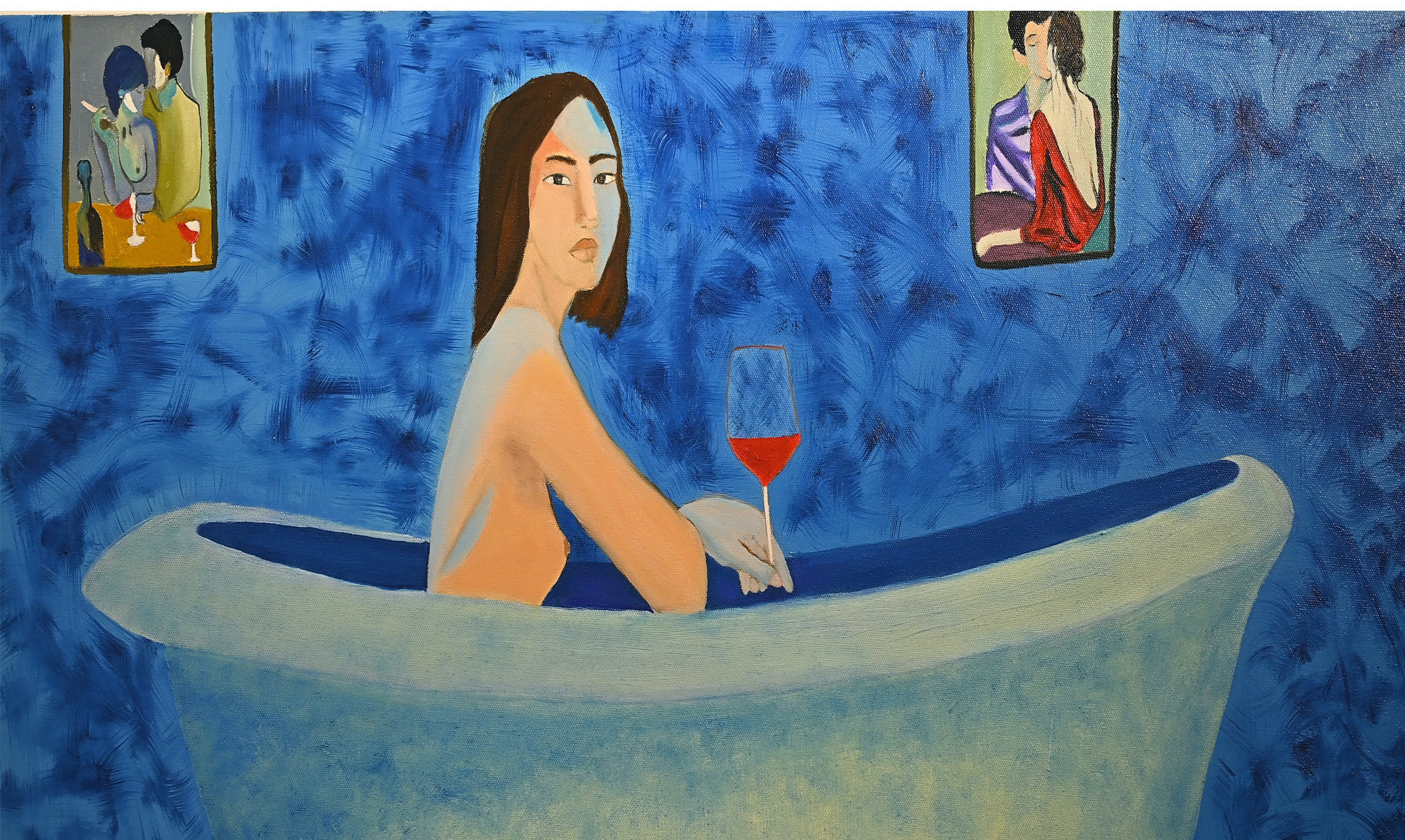 The Wow Factor: the Artwork of Sonia Basheer by Fiona Crouch

My 10-year-old daughter looked over my shoulder as I began my research and uttered one word, “Wow!” Sonia Basheer’s artwork is simple but packs a punch. 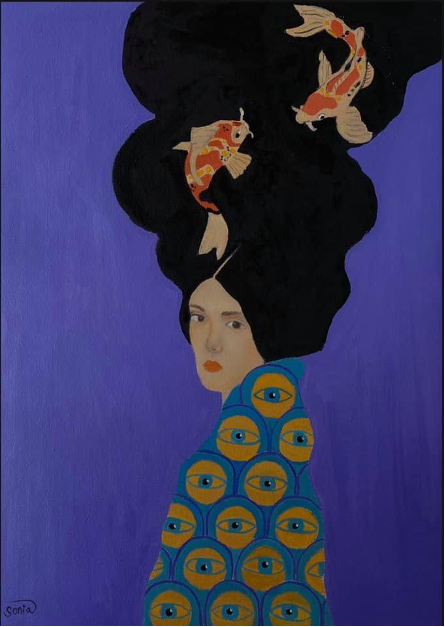 Sonia was born in 1993 in Erbil, the capital city of Iraqi Kurdistan. Erbil is a juxtaposition of modern

and traditional identities: a city famed for its shopping malls and ancient heritage sites. It is known to be a cosmopolitan and safe city, despite the ongoing threat of Islamic State activity just miles beyond the city’s outskirts.

Sonia’s lively and mischievous spirit exudes from her canvases. Through her work, you can still catch a glimpse of the child who used to paint on any white surface she could find! She temporarily put her passion to one side and graduated with a degree in English literature and language, and there is a strong narrative quality to Sonia’s pieces: she is a terrific storyteller. For her, ‘art is a language, an expression, an interpretation, and a response to the world around us…It has the power to elevate life by presenting an alternate abstract reality to which our imagination can wander and discover new opportunities. 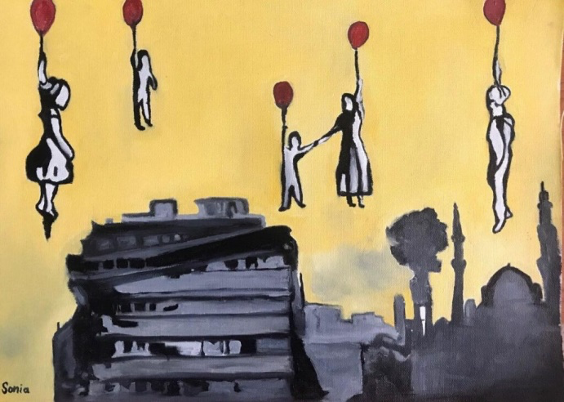 Sonia is self-taught and the influence of other artists can be seen in her work. I see a hint of Banksy in her red balloon piece and a glimmer of Klimt in the picture above. However, this is just the starting point for her pieces. Her own style and personality are firmly stamped across all her artwork. Sonia’s paintings and drawings resonate with a multiplicity that intrigues and draws in her audience. Is the red balloon piece conveying a message of hope or despair? Are the figures escaping to freedom, are they fleeing in despair or are they the souls of those who have died in a conflict that is ravaging their home city? As a mother, my eyes stay fixed on the woman and child, in the center of the canvas, reaching to each other and only just managing to hold hands. I hope for them, but I’m not hopeful.

The imagery found in Sonia’s paintings and drawings is nuanced and sophisticated, diametrically opposed to the apparent simplicity of each piece. Her work is replete with symbolism. In a number of her pieces, such as 8-min or images of Greek evil eyes feature heavily, for example as a background or on clothing. The emblematic inclusion of eyes in artwork has been used for centuries. When I saw Sonia using this artistic device, my mind immediately recalled the famous Rainbow Portrait of Queen Elizabeth I of England in which her golden gown is decorated with eyes and ears. In the Rainbow Portrait, it is commonly thought that the eyes and ears represent the Queen’s ability to see and hear everything that happened throughout her kingdom (should that have been queendom?), largely due to the successful spy network that developed during her reign. 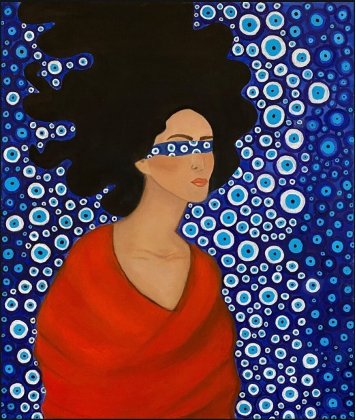 In contrast, the Greek evil eye talismans included by Sonia in her paintings have different associations. These charms are meant to protect the wearer from malicious stares known as the mati or evil eye curse. In classical times, people were especially worried about their susceptibility to this form of malevolence. Indeed, eyes were painted onto drinking vessels to ward off evil spirits that could enter a person’s body when they drank wine. But why does Sonia include evil eyes in her art? Are the women threatened? If so, what is threatening them and why do they need multiple eyes to repel the threats they face?  I am captivated by one of the evil eye pieces above all others. A woman is surrounded by evil eye charms, muted on the outer edges of the canvas, stark white near the subject. Poignantly, her eyes are blindfolded with a strip of material, with the same evil eye charm pattern. Why do her eyes need to be protected? Does she represent Themis, the Greek goddess of justice, who is always depicted with her eyes covered to prevent being corrupted or prejudiced by those she is judging? Is she a temptress seductively draped in red, or perhaps the red garment is more of a shroud to emphasize her mortality and fragility?

Classical Greek art has been one of Sonia’s main inspirations. She states that: ‘I was especially fascinated by the portraits of Dionysus (god of wine and fertility) and Apollo (god of music and art)’. She includes bottles and glasses of red wine in many of her pieces, often with a surrealist twist, with seemingly incomplete or wonky glasses brimful with wine or twisted bottles that defy the laws of physical being. 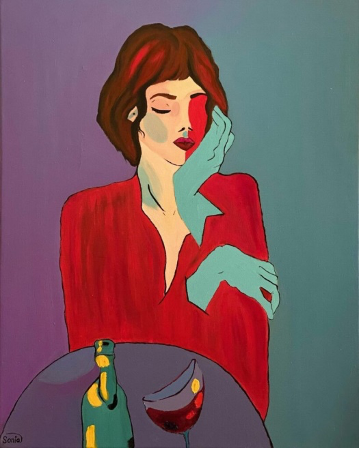 In Mediterranean countries and the Near East, red wine is traditionally seen as signifying life, sustenance, and transformation. For Sonia, this view is only partially correct. She mentions that wine serves as a reminder of who we are as fruitful beings’. However, she also regards wine to be ‘a symbol of the brevity and transience of life. Her message is clear, we should not shy away from this fleetingness, and it is to be celebrated. Sonia continues ‘The origin of wine is grapes. But unlike the fruit, which decays with time, wine improves with age. It survives well past a human lifespan and serves as a legacy of labour, celebrations, and good times. The message of her artwork is clear – we, along with all living things, might not live forever, but a person’s impact can last beyond their lifetime. I return to her paintings with the evil eye talismans; they haunt me. As I made dinner tonight, I kept seeing eyes as I set about my chores, such as the eyes created by the burners on the hob, reflected and multiplied in the metallic surface of the pans I was using. That’s what great and impactful art does; it crosses boundaries, and stays with you throughout moments of mundanity. Wow – I echo my daughter’s words. 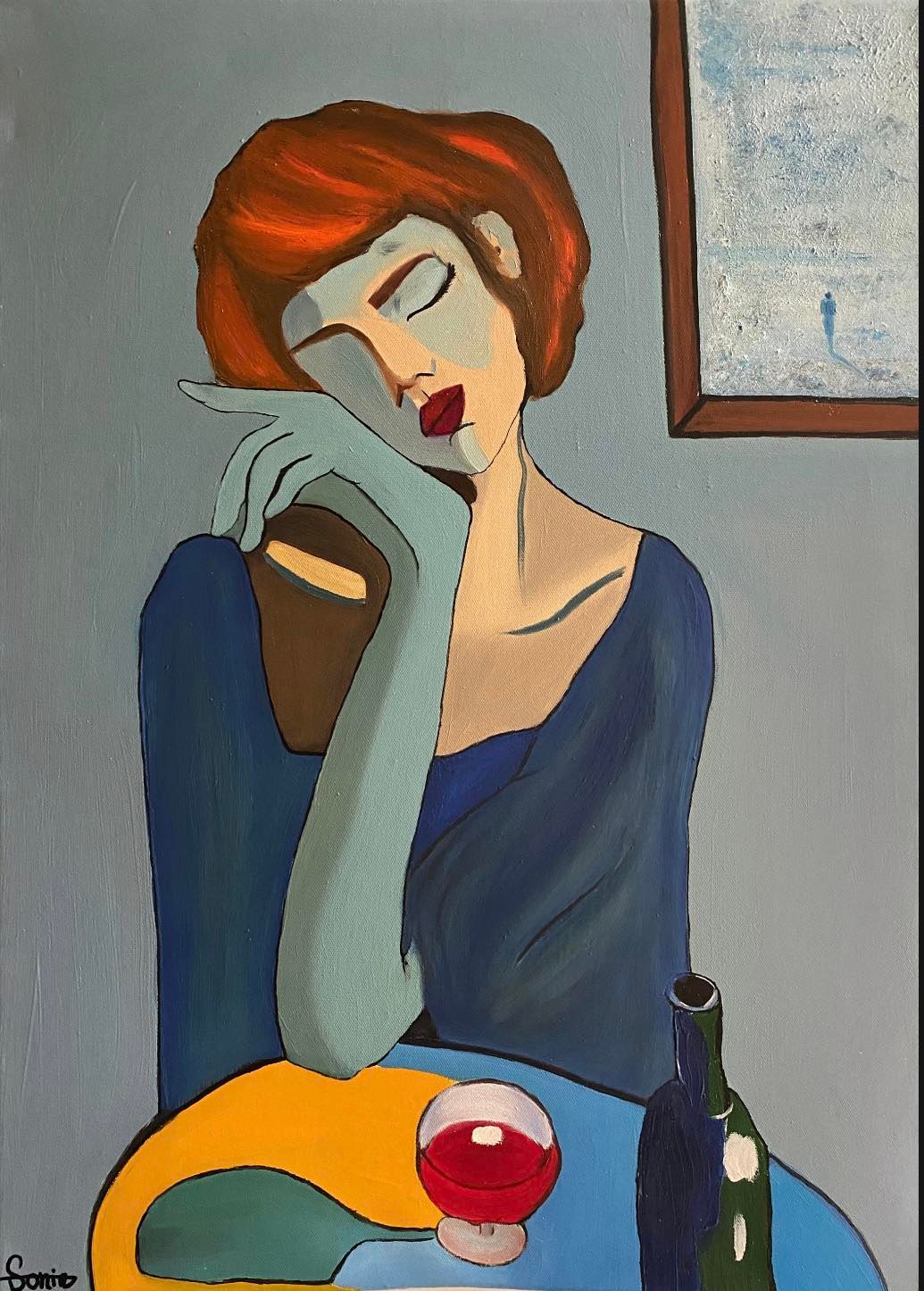