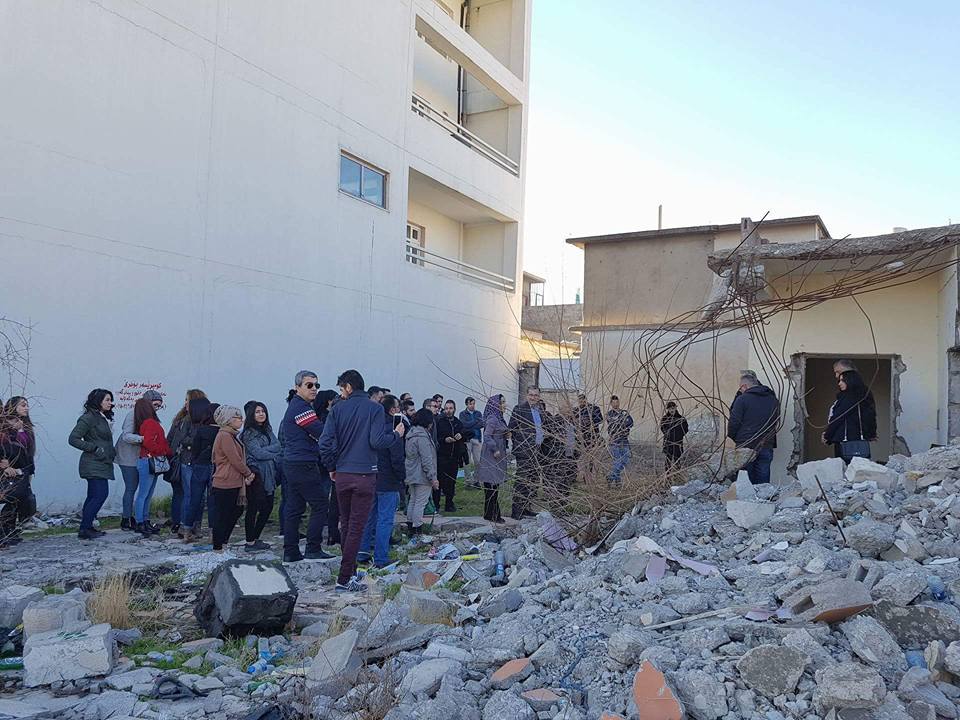 Between 7th and 11th of January 2017, works by three artists were exhibited in a tumbledown house opposite the Red Security prison in the city of Sulaymani, Kurdistan. The exhibition contained works of art by Naz Hakim, Zamowa Dara-Agha and Yousif Salih, while poet and writer Ramyar Mahmood introduced the event.

In his introduction to the event, Ramyar Mahmoud said, “You are here now, and what you are encountering is a gap/space and objects” He went on to underscore the fact that this is encountered as an artistic gap. This gap is transformed into a place – what Heidegger calls giving space. Put another way, the gap is a freeing of space. The space opens a door that contains objects in itself: “this collection in this place is the form of settlement that takes shape.”

A salient question therefore arose concerning whether these works principally related to the formation of a place in-itself. It became increasingly clear as the event went on that artists need to create a place for their work. What, though, is a ‘place’? A place is not a pure concept in the history of art; a place is a signal of power, the power of a state, the power of the gallery – art and power are always in contact. Ramyar Mahmoud went on to say that, “We are now standing in front of several pieces of artwork from new artists, all of whom seeking a new discourse in relation to art; they no longer settle for spirit, immortality, essence and aesthetics in art. So welcome all to the hell of truth”

Artist Naz Hakim, a fine arts lecturer at Sulaymani University, School of Fine Arts/Visual Art Department, took part in this exhibition. Naz obtained a Master of Fine Arts at Middlesex University, London, in 2013. Although she obtained her Masters degree in the UK, she regularly exhibits group exhibitions in Iraq as well and other countries outside the UK. Her art typically focusses on political issues and trauma –  both of which comprise principal themes in her artwork. She often uses controversial and specific materials in her work; examples include black oil, linen, coal, iron, metal – all of which refer to specific events such as war and conflict that she as a Kurdish woman has personally experienced. She contributed to this project by presenting four paintings which defy the typical painting composition in that they employ different materials such as metal, barbed wire and chemicals. Her pieces are placed on the wall like typical paintings, but they are not paintings in the strict sense, nor can they be considered drawings per se.  Another product she exhibited included a large pleat with five blocks of entangled, rusty barbed wire; and another included a small work comprising a similar shape.

Another artist who exhibited work at the event is Youseif Salih. Youseif’s selection of artwork comprises four parts; two of them are sketches made from metal and barbed wire on wood, and the third work is comprised of metal alongside various animal bones with sketches on them. It is installed on the ceiling and can be seen from four sides. The work is also two-sided and thus can be seen from different angles. The fourth work of Youseif’s is an art installation project that was draped from the ceiling in such a way that is resembled an artificial-satellite. This piece of art comprised of used materials such as a washing machine.

Another artist, Zamowa Daragha, also participated. His work consisted of six products in two different formats. The first one consisted of three products which included cloth, acrylic, and colour pigments – all embroidered with a sewing machine. It has a visible and distinct feature, and can be placed on the wall. However, it is not a painting in the strict sense. The other three products consisted of large, seared pieces of wood; each embodying a unique form. Two of them were on the wall, and one of them was exhibited on the floor. Nails were used in all three pieces, and the burning technique employed was unique to each of three pieces.