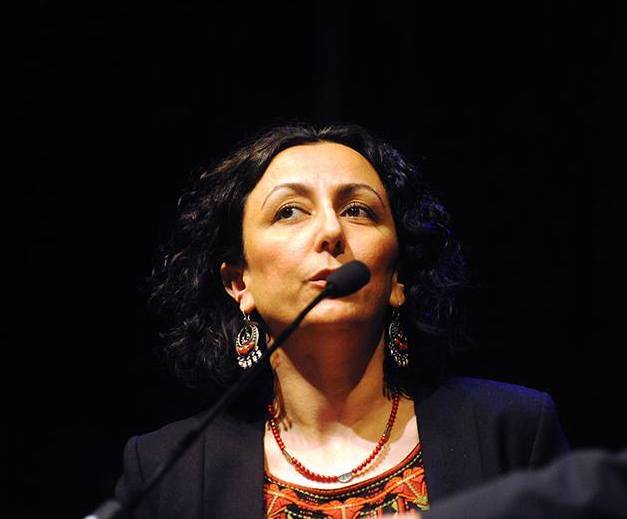 Iraq: Islam is not part of our genetic make-up

Andy Heintz: What are your thoughts on what has been termed good Muslim-bad Muslim culture talk in the West? Do you feel this talk has omitted from the conversation the many secularists of a Muslim heritage and Muslims who do not feel religion should have any place in politics?

Houzan Mahmoud: Before I even answer your question, how does it sound if we call Westerners “good Christians”, “bad Christians”, “people of Christian heritage” or “secular Christians”? The answer is that you cannot label people from a certain geographical area in such a way. In my view this carries racist connotations and is disempowering and patronizing. There are so many ordinary citizens from the Middle East who do not identify with any of the terminologies mentioned above. Instead, they want Islam to be kept out of politics. The entire terminology playing around “The Muslim” such as “bad Muslim”, “good Muslim”, “secular Muslim”, “people with Muslim heritage”, and so forth has only one aim: that is, to disempower and deprive people of agency and the entitlement to be humans rather than only religious beings. Consequently, many people would refuse to identify with such terminologies, for no matter how “soft” they may seem in their outlook, these terms carry heavy political and racist weights. Westerners try to assert their dominance and supremacy over non-Westerners by calling the “others” non-white, non-Western, and terms such as the above. Through the use of this language, non-Westerners are stripped of willpower and individual choice. Humans are not fixed categories. They change; they adapt new ways of life and beliefs. Religion – or to be more specific, Islam – is not part of our genetic make-up. Just because we were born in one part of the world, the Middle East, doesn’t necessarily means that we all are devout Muslims.

How important is gender equality to transforming the economies of the Middle East?

Gender awareness and equality are important for any society, not only at an economic level but for the sake of human relations. We are living in a world where in every sense women are still treated as less than equal. This may vary from one country to another. In the Middle East, due to wars and dictatorships, gender equality is still a long way away. Women’s liberation movements with a feminist consciousness and vision hardly exist. What we have instead are NGOs [non-governmental organizations] funded by the US and the EU, and through these NGOs certain women are turned into “divas” who are above ordinary women (i.e. the victims of everyday violence), or in the best-case scenarios, women who rule these NGOs instead of being a principled feminist and activist they are acting and behaving as corporate directors, leaders, and presidents). In return very few ordinary women who suffer violence every day get help from these NGOs. These bureaucratic hierarchical and inaccessible structures of women’s NGOs are such that the NGOs receive millions of dollars of foreign and local funding yet the services they provide are very minimal. There is a lack of solidarity and sisterhood, let alone nasty competition over funding and who gets recognition. A large number of women in these NGOs work for wages; they don’t work for freedom. They don’t even know what “gender” or “feminism” means. If their NGO’s funding is cut, I doubt that they would work one day without wages since to them it’s a job, not a cause. This is a real problem in a lot of places. We no longer have groups or movements of people with a common cause for liberation, but we have NGOs whose corporate leadership claims to be liberating women. The struggle for gender equality becomes harder because women are not organized and feminist movements cannot be built under such circumstances.

What is the state of women’s rights in Kurdish dominated areas? Does it vary depending on the area and country (Iraq, Iran, Turkey or Syria)?

Kurdish societies are not homogeneous, especially as we are divided among four oppressive and dictatorial regimes. Hostility towards Kurdish women has always existed, and they have been doubly oppressed. Despite all the pressure and persecution, however, Kurdish women continue to fight for their rights: they are secular. They try to negotiate their rights within a secular framework, unlike most of the other women’s groups in the Middle East who try to work within something called “Islamic Feminism”. At the moment the Kurdish parts of Syria and Turkey seem more progressive and militant in terms of their political and social presence. They don’t follow the NGO-isation; instead, they believe in social and political mobilization. There is a strong sense of feminism and gender awareness in the wider political movements in Kurdish Syria and Turkey. Women so far have managed to claim their place and are visible everywhere. This is less so, unfortunately, in Southern Kurdistan or Iraqi Kurdistan, where the NGO-isation on one hand and the domination by political parties in power over women’s groups on the other hand has led to stagnation of the women’s cause. There are groups, some of which are outspoken, but they are mostly foreign funded, and all they do is to comply with the funders’ criteria and to carry out activities irrelevant to most ordinary women in Kurdistan. I can say that both in Iraq and as a whole in Kurdistan as well, the problem of NGO-isation is a major obstacle to the progress of women’s rights and mobilization as a movement.

Has the U.S. invasion of Iraq helped or hurt the cause of women’s rights?

Iraq was not an oasis of freedom for women’s rights under Saddam’s regime. It depended on your position and whether you obeyed his regime or not. Of course, there was a middle-class layer that was educated to serve the state administration. At the same time thousands if not millions were suffering due to their rejection of this tyrannical regime. Dictatorship, poverty, lack of employment, war and sanctions already had deteriorated women’s status in Iraq, but the US-led invasion added to this misery.

What effect have the all-women units in Rojava fighting (often successfully) against ISIS had on other women in the Middle East?

The extraordinary and legendary role of revolutionary Kurdish women, in my opinion, has stunned people all over the world. For the first time in contemporary history, we have witnessed women in arms fighting and leading in high ranks such a fierce fight against the most monstrous Islamist force that is highly armed with the latest weaponry and in large numbers. Another aspect of the fight was that it is not only nationalistic or rhetorical but also ideological. These women have made it clear that they are fighting for the rights and freedoms of women at the same time as they are fighting the enemy. To them, the fight for women’s liberation is no less important than the liberation of their homeland.

As a Kurdish woman who suffered under and witnessed Saddam’s fascism and tyranny, of course I want an independent Kurdish state. Kurds, like any other people in the Middle East, have been there from the beginning of time. We have not migrated there or colonized the place. We have been colonized and invaded and ruled by force of terror and arms. One very distinct feature of the Kurds is that they never have ceased to fight for a better life and better living conditions or for their rights and freedoms. On the question of whether we should defeat nationalists to have democracy, I think nationalism and patriarchy are everywhere. Nevertheless, the Kurdish people have continually struggled for their fair demands for freedom and rights no matter who has ruled them, whether it be an Arab fascist regime or a Kurdish nationalist state.

What is the state of secular, progressive parties in the Middle East? What needs to be done to strengthen them so they can compete against organized Islamist parties like the Muslim Brotherhood?

It is difficult to generalize and to give an idea about all the parties in the Middle East because this region is extremely problematic. It is not only the Muslim Brotherhood that causes trouble but also many other fanatical states and groups in different shapes and forms are dominating the scene. Unfortunately, there has not been a process of secularization to separate religion from politics. What we have seen so far is the association of secularism with corrupt and dictatorial rulers and regimes in this region. For example, the Kemalist, Ba’athist, and Shah’s versions of secularism were imposed forms of modernization and secularization empty of content. These were not forms of secularization demanded and fought for by the people but rather hijacked versions of secularization meant to serve those regimes. Often when they felt the need, as in Saddam’s case, they used religion to bring back Islamization and to spread misogyny. Thus, real attempts at secularization have been hindered by such conditions.

* Houzan Mahmoud is a Kurdish feminist, and co-founder of Culture Project. Houzan has an (MA in gender studies, from SOAS-Univeristy of London), She was born in Iraqi Kurdistan in 1973 and currently residing and working in London.

** This interview is excerpted from “The Future of Progressive Politics: Voices of the International Left“, by Andy Heinz, to be published in 2018.

Andy Heintz has been conducting interviews for more than two years with progressives from around 15 countries.