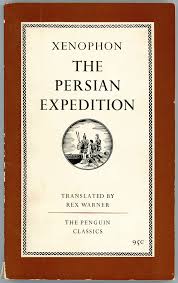 The Ancient Greek professional soldier and writer Xenophon authored many works, the most famous of which was the Anabasis. The Anabasis is a collection of seven books recounting the adventures of an army of Greek mercenaries whom Xenophon accompanied to the battle fields around ancient Persia. The mercenaries had been hired by Cyrus the Younger, who intended to seize the throne of Persia from his brother, Artaxerxes II. The work is composed circa 370 BC. In English the Anabasis is often rendered as “The March of the Ten Thousand.”

Whether it is a real biography or a story based on the information of his times, it is indeed a kind of report on the condition and situation of the lands and social groups the mercenary army encountered on its journeys. A significant part of the Anabasis deals with description of local populations and geographies, including the Kurds and Kurdistan. Some of the translators of Anabasis have titled the sections and chapters of the book based on the regions on the way of “The March of the Ten Thousand.”

One of the English translations of Anabasis was accomplished by Rex Warner in 1949 (edited by E. V. Reiu), which is the basis for the present report. In parts of the book, Xenophon directly reports on the Kurds and their homeland when he describes the Medes, Kurdish/Median Empire, Median territory, and another ancestor of the Kurds, namely the ‘Carduchi/Karduki’ people.

Book III is titled “The March to Kurdistan,” since it reports on the Kurdish homeland. It includes five chapters, in the second of which, titled “the council of war”, Xenophon describes some anthropological features of the women of the Medes and the Achaemenes. He then recounts the resistance of Medes against the Achaemenes in the town of Larissa, likely Ashur Kala near Tigris, and Mescila (today’s Mosul), as two Median cities with good fortifications. He also notes that Medea, the wife of Aegeus, the Medes’ last emperor, takes refuge in Mescila when the Medes lose their empire to the Achaemenes. Mescila later falls under the kingdom of Corduene. Scholars of Kurdish history believe that the Medes were proto-Kurds or one of the ancestor groups of Kurds, as the Xenophon’s emphasis more on Medes in the sections related to Kurdistan also implies the relation between the Medes and Kurds. Accordingly, his report shows that the women of proto-Kurds had important role during Medes. Even after the collapse of Median Empire, powerful women such as Medea played a role in the resistance against Achaemenes. But during Achaemenid period the role of women changed more. It can be said that somehow another stage of subjugation of women started. Along with Achaemenid women, thus, part of Median women were also considered as part of ease and luxury life of men; the “fine great women,” in Xenophon’s words, induced a dreamy amnesia and immobility like the fruit of legendary plant of Lotus. Thus, political changes affected the role of the female proto-Kurds. In continuation of the report, he considers further the land and offspring of the Medes and their kin groups.

In chapter 5, Xenophon continues to describe a part of Median territory “between the Tigris and the Mountains” beyond which lies the way to Ecbatana, the ancient Median capital. On the way, Xenophon encounters the ‘Carduchi/Kardukhi’ people whose name is directly related to ‘Kurds.’ He describes them as “people [who] lived in the mountains and were very warlike and not subject to the king.” He notes that the Achaemenids are eventually forced to make a contract of accommodation with the Carduchi for failure to subdue them. Hence the country of Carduchi as a residual part of the Medes’ empire preserved its autonomy. Xenophon then reports on the lifestyle, characteristics and situation of the Carduchians when the Greek army passes across the mountains of the country.

The next section, ‘Book IV; the march to the sea’, is also related to Kurdistan. In chapter 1 under “the entry into Kurdistan”, Xenophon, by describing the characteristics of people on the way to Armenia via Kurdistan, describes the reaction of the Carduchians to the invaders. By noting that they enjoyed “plenty of food” and had “a lot of brazen utensils” in the houses, Xenophon indicates his regard for the Carduchi people and their civilization at the times.

Carduchians then attack them to preserve their land, since they see the Grecians as invaders, supporters of the Persian king. Through a war report on the way via Kurdistan’s mountains, Xenophon mentions the Carduchians’ bravery and their methods to communicate at night, especially by ‘lighting beacons on mountains as signals to each other.’ In chapter 2, under “fighting in the mountains” and chapter 3 under “the crossing into Armenia,” he reports further on the war with the Carduchi people. Eventually in chapter 4 under “they sack the camp of Tiribazus,” he also reports the conflict between Carduchians and Armenians on the border between Kurdistan and Armenia that is likely around the Ararat Mountains, the upper angle of the triangular land.

Rather than being a real biography, Xenophon’s book may be regarded as an advice work, based on the narrated information intended for the Greek army to show precaution while passing through the Median territory to go towards Persia. Alexander the Great certainly later used the book as a guide. It shows Median territory and Carduchians as a well-known land and people at the time of its writing. Indeed, the text presents one of the oldest sources directly recognizing Kurdistan and the Kurds. Through narrating this March, Xenophon produced an earliest detailed and reliable old map of some parts of Kurdistan with their approximate borders. He also captured the anthropological characteristics of the ancestors of the Kurds and a historical reality about their main enemy.

Thus, Anabasis can be regarded as an important historical literary source about the Kurds and Kurdistan. After the times of Xenophon, the Median territory was more recognized by the name Korti or Carduchian/Kardok. It was likely used for naming the resident kin groups, some of whom created the Corduene state; a name more associated with the current word of Kurdewarî in Kurdish. The main Median territory gradually become known under the new form of the name ‘Kurd’, namely Kurdewarî/Kurdistan.

It is obvious that because of the invasions and consequently changing demographic/social structures, the borders of Kurdewarî/Kurdistan have constantly changed. For example, in the time of the Medes as a group of Kurdish ancestors who created the first empire in the region, the eastern borders of Kurdistan itself – not all lands of other nations under the power of Median Empire – were very vast including Ecbatana/Hamadan, its capital. Despite shifting borders, the Kurds have stayed on their land throughout history. With the exception of the ancestors of Kurds in Mesopotamia and Zagros like Mitani-Hurrians, Mannaeans, Guti/Kuti and so on that all attribute to Kurds. Both the people and land have been directly and indirectly mentioned by historians since the ancient age; in Greek, Kurdish, Islamic and Christian sources.

The use of the word ‘Kurdistan’ as the land of Kurds, thus, officially for the first time during the Seljuk time (1037–1194) was not by chance. The Seljuks just applied a different form of the existing recognized historical names by using the suffix “stan” to indicate the land of different peoples. Before them, the Kurds were well-known by the current name in Islamic-Arabic sources such as the work of some historians like Dinawari, Tabari, Ibn Wahshiyyah, Bayhaqi and so on, though the ancestors of them were called in Sumerian as Guti, in Syriac and Aramaic as Kuti, Korti, Kardo and Kardan, in Persian as Kortiyoy, in Greek and Roman as Kardosoy, Kardok and Kardokhi. In the Greek texts like the History of Herodotus, Xenophon’s Anabasis and so on, many times the related words had been mentioned such as Medes, Media, Carduchi people and Carduene/Corduene/Korduene.

In relation to the Christian sources, Thomas Marga’s “The Book of Governors” from the 9th century is considerable. As a priest in a Kurdish region, Marga mentions some other Kurdish priests in Kurdistan before his period. Even, the translators and editors of its original text, like its version in 1893 edited by E. A. Wallis Budge, directly mention the word ‘Kurdistan’. In this regard, also, some books of Christian history like “The Nestorian Churches” by Aubrey R. Vine (1937) and “A History of Christianity in Asia” by Samuel Hugh Moffett (1992) directly mention ‘Kurdistan’. All these sources show a continuity in using the word and identification of Kurdistan as a special and certain land.

The existence of very old Kurdish texts such as the Êzîdî‎/Izidi religious texts, the Kurdish poems of Hormuzgan, Yarsan religious texts and the continuity of Kurdish principalities over history from the time of the Korduene state to the 19th century all are evidences of the historical existence of Kurds on their homeland. Apart from some non-existent sources cited by other historians like “A History of the Kurds” or “the origin of Kurds” attributed to Abu Hanifa Dinawari a Kurdish scholar and historian of the 9th century, from 16th century gradually some books of Kurdish history, like Sharaf al-Din Bitlisi’s ‘The Sharafnama’ (1597), then from 17th century the classic Kurdish texts like Ehmed Xanî’s Mem û Zîn and so on emerged. According to Bitlisi, Kurdistan covers a triangular land that its angles reach the Hormuz sea/Gulf, Ararat Mountains and Mediterranean Sea, where there have been many Kurdish states and principalities since the time of Medes and then Carduchians and Corduene.

Sabah Mofidi, holding PhD in political science, is an independent researcher who works on socio-political issues of Kurdistan. He is currently a research fellow at Netherlands Institute for Advanced Study.