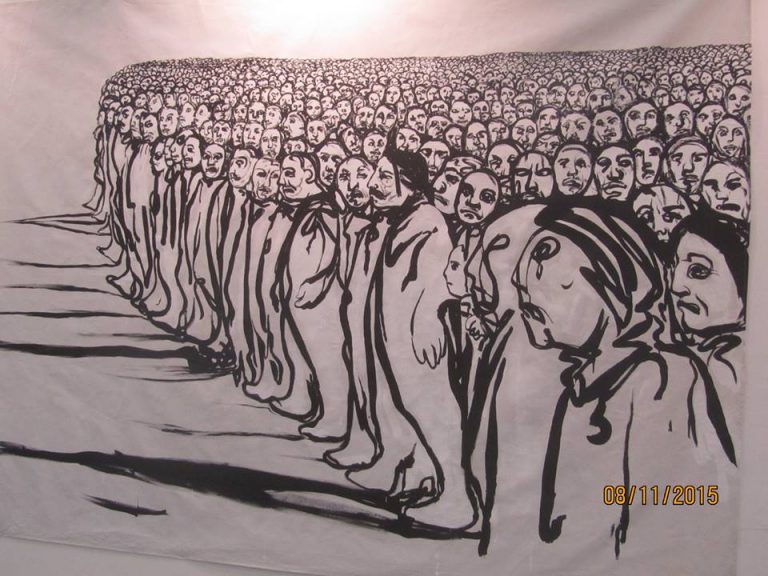 Saddam Hussein’s regime attempted to solve the Kurdish question once and for all in the 1988 )Anfal( Campaign, a final solution aimed at the Kurdish people. The campaign targeted Kurdish rural areas in an operation of systematic destruction. The word Anfal derives from the eighth chapter of the Quran and means ‘spoils of war’.

What effect have the atrocities of genocide had on Kurdish art? How has Kurdish art expressed the massacres of the Anfal Campaign? Has Anfal become a main theme in Kurdish art? Have the Kurds successfully conveyed the magnitude of their horrific experience?

Unfortunately, Kurdish art, for the most part, glosses over Anfal and does not represent it as it is. Because Kurdish artists, painters, and sculptors predominantly ignore Anfal and only occasionally represent it where requested by political parties or organisations on the Anfal or Halabja anniversaries, as a result, Anfal is not a main artistic theme in Kurdish art like the Holocaust might be in European art. Kurdish art has not represented Anfal at the global scale. Anfal also has not been able to produce a co-memory among the Kurds themselves.

Osman Ahmed is a prominent Kurdish artist who attempts to represent and thematise Anfal in his art. While other artists only occasionally work on Anfal, Osman Ahmed has made Anfal his main project. Ahmed places a great deal of emphasis on Anfal in his art. He has dedicated himself to working on Anfal since he was a Peshmarga. Having survived the massacre himself, he completed his MA and Ph.D. in art in the UK. As Anfal is reflected in nearly all his artwork, he could be the ‘Anfal artist’.

Ahmed also works on Anfal at the academic level. He draws upon what happened during the Anfal campaign in detail, from the initial airstrikes to the chemical and ground attacks to the mass arrests of the survivors and their transfer to concentration camps. He also sketches the plight of the victims in the camps, such as the forced separation of family members from each other and the fear, pain, starvation, and deaths.

Ahmed uses different mediums and styles. in his earlier artworks, he frequently used colours and worked with paints and brushes, but in his later works, especially those of his Ph.D. project, he used pencils, which become his main style. It seemed to accord best with his subject matter – the Kurdish genocide.

Osman Ahmed wanted to document Anfal via his drawings and artwork as they appeared in his Ph.D. thesis. He documented different aspects of the tragedy of Anfal and its aftermath, drawing from experience. He personally witnessed the Anfal Campaign in which Kurdish villages were burned, water wells filled, and villagers arrested and transferred to concentration camps. Osman told their stories through his sketches and drawings instead of language. He transformed survivors’ testimonies into drawings.

Genocide aims to annihilate a specific group so that nobody is left to tell their story. But when death is narrated, it is not so easily forgotten. There is thus a relationship between death and narrative. To erase a group from memory, the persecutor aims to completely cancel out the group’s testimonies, memories, and names from history. To remember the victims, and thus counter this insidious plan, their stories should be told in through as many mediums of art and literature as possible. Osman Ahmed’s art is reminiscent of the Anfal. Ahmed, via his drawings, commemorates the victims of Anfal, narrates their death, tells their stories, documents their lives, celebrates their endurance, and sketches their journey. 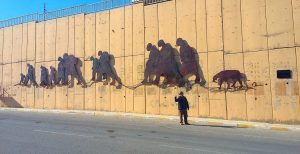 Osman Ahmed’s artwork depicts different figures: men, pregnant women, children, the elderly. There are also figures of animals, especially dogs. There are two different representations of dogs –dogs as domestic animals that coexist with humans in the villages and those in the concentration camps. When the Kurdish villagers were transferred to concentration camps, dogs also suffered a similar fate. There is a famous story of a black dog in the Nugrasalman camp that is told by most of the Anfal survivors. When the camp internees would die as a result of starvation, disease, and exposure, they would be buried in the camp. The black dog would dig up their corpses and eat them right before the other internees’ eyes.

In Osman Ahmed’s work, many of his figures meekly submit to their tragic, fatal destinies. Why is this? To answer this question and understand, we consult Hannah Arendt. In The Origins of Totalitarianism, she explains the three steps towards total domination in concentration camps.

First, Killing the Juridical Person.  This is the process of excluding specific categories of people and outlawing them. As a consequence, these people become ‘rightless’.

Second, Killing the Moral Person. Killing moral agency in concentration camps is the second step of the domination process. Every genuine moral choice is taken away from the inmates; as a result of their separation and isolation from the rest of the world.

Third, Destroying Individuality. Destruction of human uniqueness and individuality is the third step in total domination. According to Arendt, this step is the hardest task for totalitarian regimes. They do the task through institutionalised and permanent terror.

With these three steps, totalitarian regimes aim to dehumanise the victims. What is left is subhuman. Osman Ahmed’s figures endure this process of dehumanisation and their rights to choose and to act according to their free will are taken away from them. Therefore, they go meekly towards their deaths.

Osman Ahmed’s figures are not only Kurdish, although in his earlier artworks the figures could be recognised by their Kurdish identity. His figures gradually take on a more humanistic character. Ahmed first of all wants to represent the victims as humans who undergo the Anfal massacre. But he likewise wants to give a universal dimension to his figures. He therefore attempts to lay bare Anfal as it relates to the global scale. His artworks thus acquire a universal dimension.

Because of his success, Osman has repeatedly been invited by academic institutions, universities, and organisations to speak and share his experiences and also explain Anfal and Kurdish genocide through his drawings. Osman’s artworks have been exhibited at Tate Gallery, London in 2007 and the Imperial War Museum. Recently, Osman Ahmed has won the IAGS prize in the arts for his depictions of Anfal and Kurdish genocide.