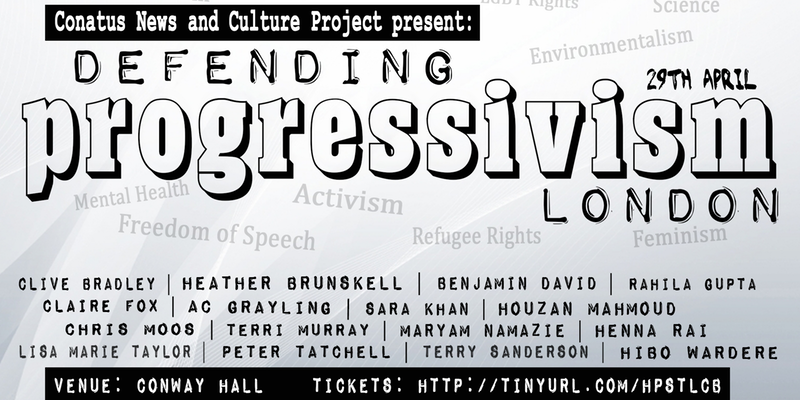 Culture Project & Conatus News and sponsored by the National Secular Society and the British Humanist Association) Defending Progressivism is an unprecedented day-long conference focussing on defending social-progressivism (LGBT Rights, Feminism, Environmentalism, Secularism, Irreligiosity, etc.) held in the famed Conway Hall. Not only showcasing some of the most significant challenges to social progressivism through distinguished panel-discussions, individual talks, stalls and book sales, but some of the greatest minds in activism today will exchange views concerning such crucibles and how we, as social-progressives, can begin to get a foothold in opposition to redress them.

Confirmed speakers (more to be added) so far include:

PANEL 2: ‘Feminist mobilising against Islamism there and here:

– Rahila Gupta is a writer and journalist

-Gita Sahgal ( Writer and journalist on issues of feminism, fundamentalism, and racism)

-What is Conatus News?
Founded in 2016, Conatus News is an online blog news-platform started by grassroots activists that aims to give progressive voices centre stage on important issues – from current affairs, politics, and culture, to philosophy, science and religion. Conatus News aims to evolve news by refocusing the ethos of news away from personalities, sales and partisanship over to a commitment to social progression. Furthermore, as part of its attempt to disseminate and effectuate progressive narratives, Conatus News has a widely respected interview and podcast series that has featured some of the most exciting up-and-coming activists and, moreover, some of the most distinguished activists working in human-rights today.
Since its inception, Conatus News has managed to amass a team of sixty dedicated writers from various backgrounds and professions and has managed to forge itself as one of the most significant progressive news platforms in the UK today.

We really hope that you will be able to participate in what will surely be one of the biggest and the most exciting conferences in the UK in 2017.