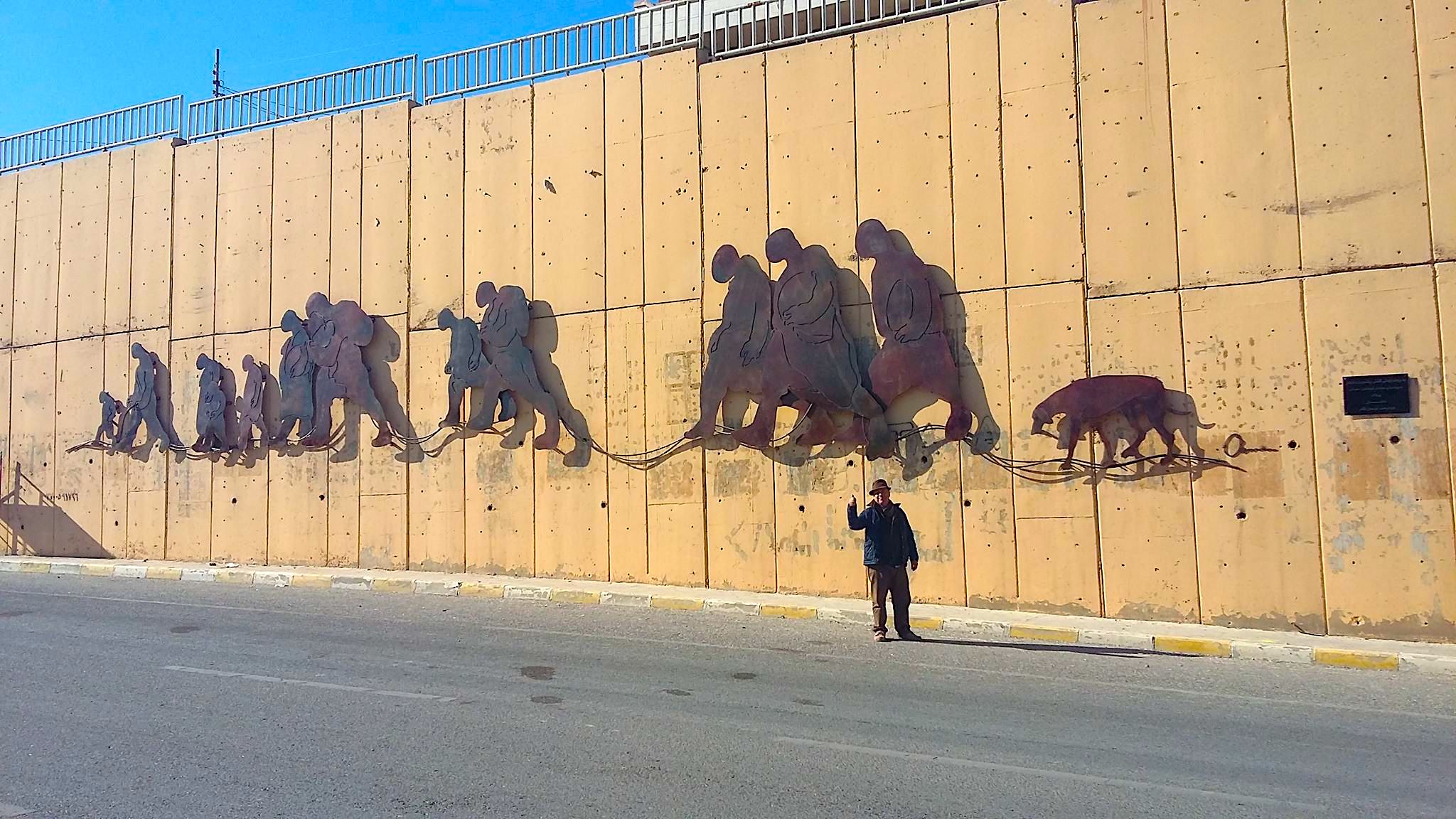 15th of January 2017 was not an ordinary day in the city of Sulaymania, Iraqi Kurdistan. This day was special because an extraordinary work of art was installed on a public wall. The work of art, installed on the main wall in Reaya hill, created by renowned Kurdish artist Dr Osman Ahmed, thematised both the complexity and the tragedy of the Kurdish genocide. The piece of art consisted of various metals depicting different figures of men, women, children and a dog. According to Dr Osman Ahmed, the work of art is a permanent reminder of the former Ba’athist regime’s genocidal crimes against Kurdish people.

In a symbolic move, and as an act of deliverance, Dr Osman Ahmed strikingly emboldens his memories formally through the medium of his art: the burning of Kurdish villages, exodus and mass-graves carried out under the fascist regime. Thus, Dr Osman Ahmed is not only an artist, but he is also a witness to the tragedy of genocide which has haunted him to such a degree it played a substantial role during his time as an academic in the UK, and continues to play a substantial role in his art. The sketches he worked on is a symbol of various crucibles, tragedy, fear and anger – all of which he went through during his youth when Iraq was under a dictatorship. A memorial for the genocide, his art not only crystallises the uncertainty and fear at the time, it also draws attention to the mass death from the genocide and the fact that countless numbers of people were forced to abandon their homes in the most grievous of circumstances.

As previously mentioned, different figures are shaped in Dr Osman Ahmed’s work; for example, carved figures of pregnant woman, old men, children, and a dog. These figures are depicted in order to show the extent to which the tragedy of the genocide affected every aspect of human life (even animals). Thus, for Dr Osman Ahmed, it is also important to also include the tragedies suffered by domestic animals. For him, a dog, for example, lives alongside humans, shares land and food with humans, and is typically housed with humans. The inclusion of the dog within the procession of humans in his artwork, all of whom are being hauled towards their fate, is owing to the fact that when humans are driven out of their homes, due to various reasons, animals such as dogs become homeless (and worse), and their lives are thus affected in unprecedented ways.

From his own experience and the sufferings of his relatives, friends and the suffering of the nation as a whole, Dr Osman Ahmed documents a harrowing, emotive and deeply personal story. Osman has made it his mission to dedicate his energy, research and studies to the tragedies that occurred during the genocide in order for it to be retold in the medium of art, a medium that is unique and distinct from others.

Osman Ahmed was born in 1962, and his inspiration comes from his own Kurdish society. As a nation, Kurdistan is one whose history is full of horrors of mass execution and discrimination by dictators, one after the other, Raised in the neighbourhood of Chwar Bakh in Slemani. Dr Osman Ahmed refused to participate in the war between Iraq and Iran in the early eighties, which resulted in him fleeing into the mountains of Kurdistan, where he later joined the Kurdish Peshmerga forces.

Ahmed is a prominent Kurdish-British artist, a researcher at the Kurdology Centre for Kurdish Studies, University of Sulaimani, Kurdistan Region. Ahmed graduated from the Institute of Art in Sulaimani-Iraq in 1985, earned his MA in Drawing from Camberwell School of Arts  in London in 2007.

While completing his MA, Osman Ahmed’s work was showcased at the Tate museum in London in William Turners room. Ahmed was fascinated by Turners drawing of (Mountains near Dunkled c.1801). This particular work by turner reminded Ahmed of his homeland and the mountains of Kurdistan when he was a Peshmerga. Osman Ahmed later obtained his PhD from London University of Arts in 2013 with an extraordinary PhD project documenting the Kurdish Genocide (Anfal-Genocide of 1988 through Drawing). In a string of dark sketches for his PhD degree, Dr Osman Ahmed interviewed victims and survivors of the Genocide – transforming their sufferings and losses under Ba’athi regimes into sketches.

His thesis investigated not only the crimes committed against Kurdish people, but it also investigated the responses to such crimes against humanity. This investigation were done by analysing 355 detailed drawings, testimonies and memories of 15 Anfal survivors, as well as drawing upon the collective Kurdish memory of the genocide more broadly.

Dr Osman Ahmed has participated in many events – on both local and international levels. He has given lectures and was a guest speaker on many panels, conferences and seminars on issues around genocide. He has also exhibited his artworks on the al-Anfal in the past years across the Middle East and Europe, including a three month exhibition of his artwork entitled the Displaced, in summer 2008, at the London Imperial War Museum.

Links to some Osman Ahmed’s exhibitions