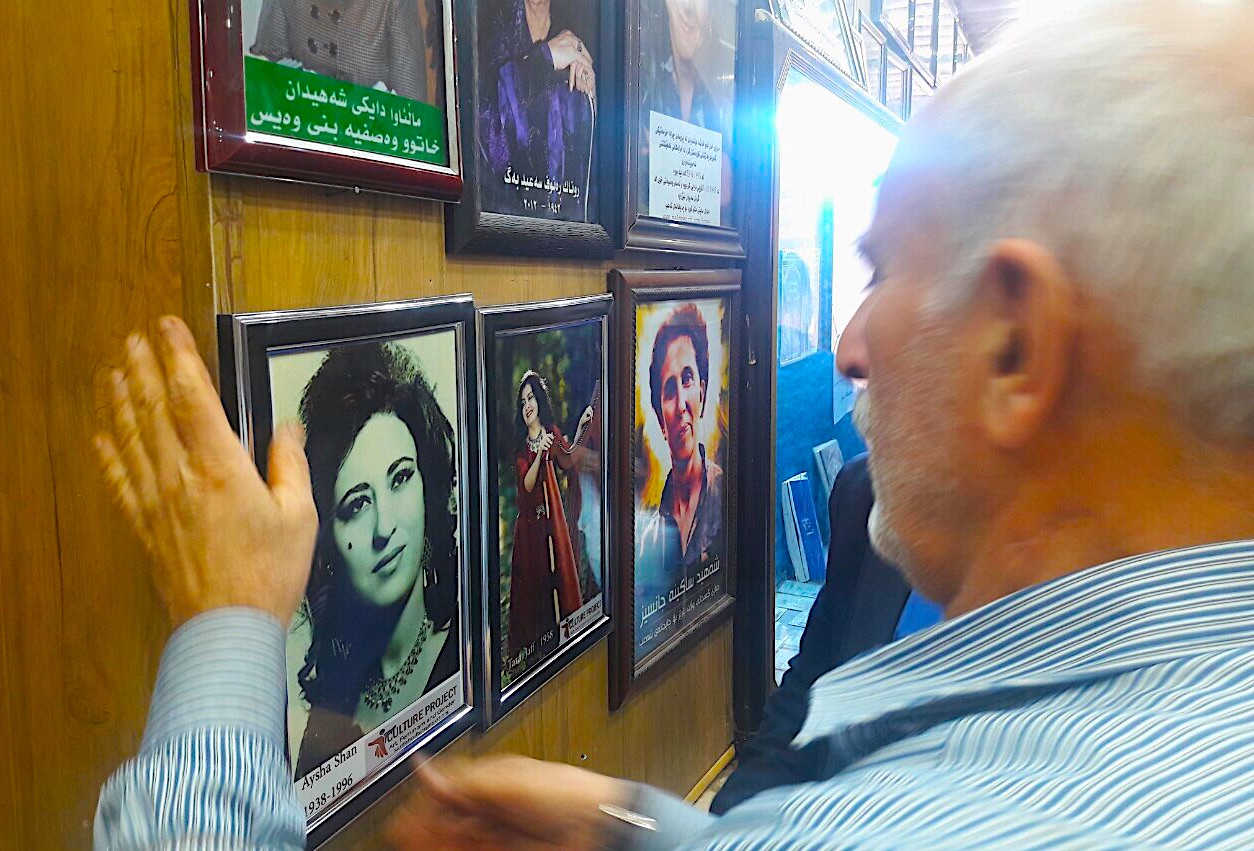 On the 19th of September 2016, two of us-the cofounders of Culture Project (Houzan Mahmoud and Ismail Hamalaw), visited the oldest tea house  in the city of Sulaymani, called Shaab (which translates as Nation), in the midst of a sunny afternoon spent with Kurdish poet, Hiwa Qadir, and Kurdish artist, Aram Ali, we met with Mr Omar, the owner of the tea house, who was very happy to meet with Houzan Mahmoud for the first time. They started talking about the tea house and how it is changing. In times gone by, it was only men who went there to drink tea, smoke, and speak about various issues in society, or sometimes simply to socialise. The Shaab tea house is not only a place that serves tea, but it is also a place with its own history in the city, and its owner has a great passion for Kurdish literature and art.

Shaab tea house, like many other cultural cafes and tea houses in the world, has its own place and value in our city. This important tea house has been run by Mr Omer, Mr Bakir and other members of their family who are passionate about culture and literature. Their warmth and openness, and their kind and welcoming attitude are reflective of their deep commitment to art, culture and freedom..

Mr Omar is man who aspires to make his tea house a place for women, too. During his conversation with Houzan, he said he wanted to break that tradition and make it open to both women and men. As such, recently women have also started to visit and have tea there. Houzan Mahmoud explained to him that in order to bring this place out of a male dominated atmosphere he needed to make some changes. This was new to Mr Omar, who then asked how he could do that. While having tea there, Houzan noticed that there were photos of various Kurdish politicians, artists, poets and singers in large frames on almost all the walls but they were all male and from previous generations. Houzan asked where are the photos of our women artists, the female singers and politicians who had served this society in various ways and contributed a great deal. Houzan’s suggestion was to reserve a space in the tea house and dedicate it to things like photos and female portraits. In doing this, the tea house would become more balanced in terms of the image and atmosphere. Houzan added that this would give a progressive representation of gender and aspiration to the important values of equality and gender awareness that are crucial to every public space. In addition, Kurdish women contributed a great deal to our society in terms of poetry, music, political struggle, art, and literature, and they deserve to be recognised and celebrated. Houzan explained that, by accepting and considering this gender awareness, it makes the tea house a place for mixing and socialising between men and women.

Mr Omar welcomed the idea with great enthusiasm. Immediately he pointed to the empty wall beside the main entrance to the tea house. He said he would like to dedicate it as a space for our women’s photo project as it is a visible part of the tea house and so will stand out.  As a gesture on behalf of the Culture Project, we decided to contribute to the tea house with photos of two prominent Kurdish females – the singer Aysha Shan; and contemporary Kurdish harpist and singer, Tara Jaff. We suggested that this would be our contribution and that they are free to place other women’s portraits on the wall. The idea was swiftly agreed on and the process enacted forthwith.

This is how Houzan Mahmoud, Ismail Hamamin and Mr Omar decided on the project and chose the wall, and now the photos of Tara Jaff and Aysha Shan are placed there.

Throwing ideas like this into different spheres and breaking the normalisation of male dominated public spaces could grow and crack the wall of gender segregation in socially conservative societies. This is part of the many cultural activities we can do to create gender awareness in Kurdish society; creating awareness cannot be achieved if we don’t question the small details. Gender awareness and gendering the public spaces should become a norm in all fields in order for society to get rid of perceived norms and relations that are patriarchal and misogynist. We really believe that creating such spaces for cultural encounters without discrimination against the female gender will have a truly positive effect. We are thrilled for this project to exist and, moreover, for it to spread to other cities in Kurdistan with its invaluable message of equality.