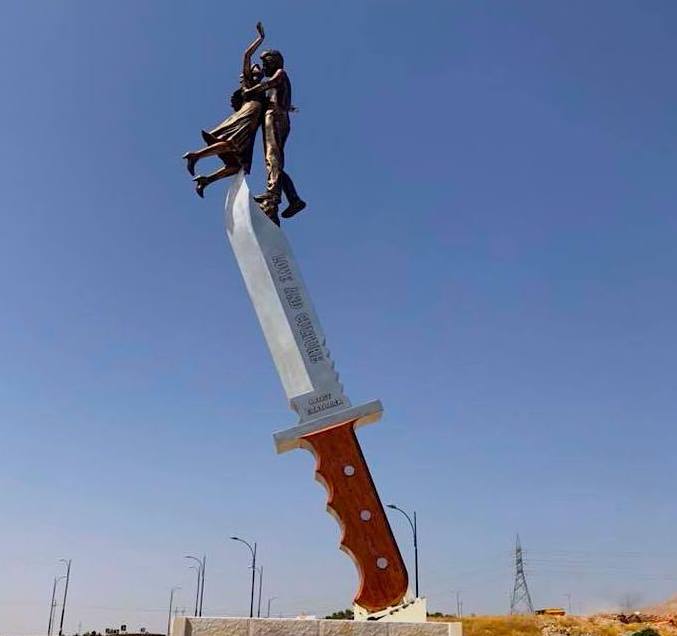 Together with the governor of the city of Sulaimani, Haval Abubakir, Zirak Mira unveiled to the public a statue he had named “love and culture” in Sulaimani, Kurdistan Region of Iraq, on August 11, 2018. The Kurdish satellite television channels hail Zirak as an ambitious and rare Kurdish sculptor. In his interviews, before and after the unveiling, Zirak gives different answers to the time frame (1, 1.6, and 3 years) of his “project of love and culture,” which, he says, weighs “4.5” tons and is “9 meters in height”. A large knife is placed on its butt and is bowed toward its edge. A male figure stands on his left foot on its tip, holding a female figure against his chest, suspending her in the air and over the point. The anatomy of the knife – “symbolizing violence” – is more realistic and incompatible with that of the human figures, “symbolizing love.” Indeed, the female statue with open arms and legs don’t seem to demonstrate the fluidity of gender but performs registers of horror, and undeniably presents a categorization of the human body as either male or female. In addition, independent of the angle, hyper-masculinity pierces the viewer’s eyes. Masculinity appears more clearly from the front and back side of the “statue of love,” where the registers of horror confront the viewer. Zirak has incorporated, consciously or otherwise, his own imagination and masculine desire for femininity into his representation of violence/love. Furthermore, “love and culture,” are inscribed in big letters and in English on both sides of the knife. “Artist” followed by “Zirak Mira” are celebrated as the signature on its bolster.

As a viewer of the circulating online images and interviews, I ask myself, what does this assembly of knife and hyper-masculinity say about the politics of art and gender in Kurdistan? Why did Zirak choose to spend “one to three years” to fabricate such a shockingly realistic knife that is larger than the male figure placed on its tip? Apart from the position of the male figure, is not the large knife a sign of masculinity as well? Why must an assembly such as this be of interest to the majority of the Kurdish people who do not speak English? Are the weight and height of “love and culture” symptoms of megalomania? What can “love and culture” as inscribed on such a knife mean? Why did Zirak choose the English and not the Kurdish language? Does it mean that only an English speaker is acculturated and thus the right viewer? Is there anything artistic or aesthetic about the “project of love and culture”? Is not it manifestation of pure violence? Finally, should not such assemblies that are unveiled as “art works” in a city like Sulaimani encourage art historians and cultural critics and specially feminists in Kurdistan to look into them more comprehensively and be critical?

In Kurdistan it is common to hear that for the Kurdish “elite” to write or speak English is to be international. They see Kurdish (Sorani or Kermanji) language as radically inferior to English. Although they live in Kurdistan their minds reside elsewhere, which makes them foreign to whatever they deem Kurdish. Therefore, they have no interest in the history of the Kurdish language or the history of art or culture in their own place of birth. This manifestation of a colonized mind, to borrow from the novelist, Ngũgĩ wa Thiong’o, shows that something else is afoot as we stand before the assembly.

I wonder whether the assembly is an attempt to visualize heterosexuality as the condition of “love and culture”? And does love mean culture mean the point of contact only between a “man” and a “woman,” and thus all other kinds of human relations must fall to nonhuman urges? Observing the radically different positions assigned to the human figures, with no anatomy, I see clearly how feminicide is at stake. While the male figure stands with his left foot, the existence of the female figure depends entirely on his arms that wrap around her like a snake. Sweep the male away, and they both die, but if the male loosens his arms then the female figure falls on the point and would die an atrocious death.

We can ask then; is not respect for women’s humanity rather more profound than be visualized as an assembly with the name “love and culture,” which is an outrage to human imagination and to the history of art and aesthetics or sculpture in what is today called Iraq or Kurdistan. Equally outrageous is the understating of gender equality that makes a female’s life contingent on a male’s arms.

Zirak has made it easy for himself, wrapping the assembly with a simple but essentialist and degrading story: Kurds are a “people without culture and are unable to love.” Therefore, he thinks, what the Kurdish people need to learn is that “a knife cuts and divides and that love binds together worlds”. In his interviews, he also repeats, “any society that is formed on the basis of love is a healthy society, and the society that is based on violence is unhealthy”. These words should not be confused with the assembly. The words rather point at how Zirak has learned to ignore history, differentiate culture from “nonculture,” love from “non-love,” and thus show his rudimentary and binary reaction in the world of his birth.

The complete elimination of the Iraqi Ba’th state has obviously ended not in a different political culture or love but in the reign of horror. Political violence continues to form the foundation of what is now called “Iraqi Federal Government” or “Kurdistan Regional Government”. Iraq goes through what is commonly called the multiplied-Saddam-era. The so-called “political” parties in Kurdistan are properties of men, and have grown into military powers not to defend the borders of the Kurdistan Region but to suppress the Kurdish civilians. It is impossible to deny this when one observes the ways in which these parties operate to control, praising Peshmerga instead of aesthetic education, philosophy, history, science, music, literature, archaeology, and architecture; creating and promoting their own “artists” instead of appreciating artists and art; killing protesters instead of respecting their human dignity and capabilities; and transferring the wealth of Kurdistan to other parts of the world. It is the parties and political affiliation that decide what public “art work” is and where it should be unveiled. The parties live off the temporal memories and the violence that kept the Ba’th party alive for more than 30 years. As we know greater violence (the US-UK led colonization) made the Ba’th party and the way it existed disappear. As we also know the US, UK, Iran and Turkey accept the Kurdish parties and the Kurds as long as they remain submissive and act like good fighters defending their colonial operations in Iraq in general. It comes as no surprise then that the Kurdish parties live without any future visions, or that the arts scene has long been dominated by politics and men. The parties are armed to the teeth and have given themselves free rein to violence and suppression of the civilian population they claim to have liberated from the genocidal violence of the Ba’thists.

When the civilians voice their basic human concerns in form of protest, the Kurdish parties’ cruelty bursts forth. As it can be seen the parties are also against any struggle of seeking political and economic equality for women and have succeeded in forming a society found on political violence as well as virility.

With his words and not his assembly, Zirak pretends to set himself against the current political, social, religious and cultural life. “Our society is feminicidal,” he repeats to Hiwa Jamal, for whom acts of feminicide is yet to become a concern. He is the Kurdish messiah who has arrived with the ultimate cure that opens “love and culture” to the Kurdish people’s eyes. In fact, feminicide haunts every society and culture and must be opposed everywhere, including Zirak’s assembly. One must be a denialist to think that Donald Trump, the current President of the USA, believes in gender equality, or the poet and Nobel Laureate T. S. Eliot was a feminist, or Josef Fritzl, the Austrian citizen, didn’t imprison, and sexually assault his own daughter for decades. The list is long.

The illusory grandeur of Zirak’s assembly and the consolation of its masculinity absorbs his imagination and wins his visual relation to the world he inhabits. But let the man standing on the large knife wave, and all is in ruin. In any case the ruin falls upon the woman.

The assembly and even what is called the “lord of women’s victory” that the city of Sulaimani dedicated to the Kurdish female fighters in Rojava, demonstrate complete ignorance of human anatomy and social and political life, and suffer artistic and aesthetic imagination. The assembly is by no means a celebration of art, or an interest in upending the memories of gender or a fastidious response to acts of feminicide in the Kurdistan Region, or for that matter Iraq. It bears the identifying marks of politics of art and gender on one side, and virility on the other.

Nonetheless, it is remarkable that in a part of the world, Mesopotamia, where culture and love have a shared history and where art and aesthetics flourished, Zirak is appearing with a feminicidal-megalomaniac-assembly that has no relation to culture or love and is anything but work of art.