Culture Project in collaboration with Culture Project Society at University of Sulaymania in Kurdistan marked (8 March International Women’s Day) with a seminar on Feminism, Art and Gender.

On the 7th of March a seminar was hosted at the building of Old Cigarette Factory in Sulaymania, a seminar on two topics Feminism and Gender, as well as Feminist Art. The seminar was presented by Khanda Hameed Culture Projects coordinator in Kurdistan, and Nabaz Samad University lecturer and editorial board member of Culture Magazine, the Kurdish print magazine of Culture Project. In the beginning Khanda Hameed started by welcoming people and greetings for International Women’s day, then she introduced Culture Project, its aims and visions. Her talk also centred around a generic introduction of ( Feminist and Gender). Khanda Hameed in her talk elaborated on the term Gender, its meaning and difference with Sex. In this relation she also shed light on the history of feminist movements and the different waves of feminism and their importance in women’s liberationist struggle. 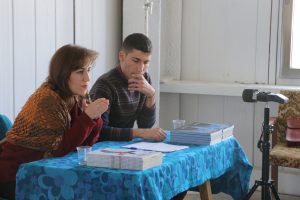 In the second part of the seminar Nabaz Samad, editorial board member of Culture Magazine, and lecturer at the faculty of Art at University of Sulaymania spoke about Feminist Art. In his seminar Nabaz Samad spoke about what is Feminist Art? Why it is important and what made it happen by delving into history of feminist art movements. To explain his talk further he drew from various feminist artists’ works, and it’s significance in challenging gender stereotypes. Nabaz also spoke about the 1960’s and 1970’s feminist art and its uniqueness as well as importance for the twenties century societies.

Later on the members of the group who are mainly aspiring artists and are involved in various art projects such as performance art, video art, drawing and painting started an interesting debate. Discussing the effects and importance of gender awareness in Kurdish cultural productions.

At the end of the seminar both issues of Culture Magazine were distributed among the attendees, thus the activity came to an end.

We at the Culture Project give our thank and appreciation to X line staff members at the Tobacco Factory, Sangar Abdulla and Ranja Ali who supported this activity. We indebted to their support and solidarity.