He breaks taboos with his works. Reflecting on the puritanical interpretation of Islam and traditions, he sensitively grabs the male world by the crotch and therefore lives dangerously. The artist wishes women the possibility to live out their personalities.

We are sitting in a small room surrounded by pictures and discussing the image of women in Islam. He pulls out the first picture. The colors are bleak, the objects out of focus. Ahmad breaches the issue of clothing regulations and women who are stuck in black, floor-length bags and look through two holes, as the artist puts it. 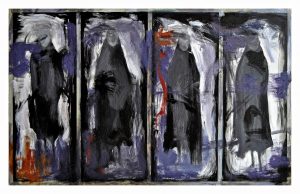 These black covers not only conceal their bodies, but also their expressions, their emotions – everything that makes a person unique. They bury their personalities. With these regulations, we are placing our women at the margins of society, the artist critically maintains. These dress codes are not wanted by Allah, but made by man – as a system to control people.

In the next picture, Ahmad focuses his attention on women whose voices mean less in court than those of men; women who are not allowed to express their opinions and are condemned to silence. The artist puts a spoon along a woman’s nose and interprets her mouth as something that only serves for food intake. If the rules of conduct are disregarded, she is threatened with the sword – and therefore death. With the numbers on the edges of the picture, the artist points to the persistent medieval view. The year 2014 marks the advance of the terrorist organization “Islamic State” in Northern Iraq. 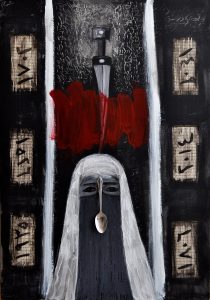 Ahmad was born into the Muslim faith, is married and the father of two daughters. How do women live at his side? I ask him. “Religion is not a central theme in our family,” he says. His daughters should not be afraid of Allah or God and love Him if they want to. However, he desires cosmopolitan children who are not cut off from the outside world by a rigid interpretation of Islam.

His wife is a believer, but she is not veiled, nor does she wear a headscarf – and if she covers her head, it is not for religious reasons, but because she likes it. “My wife moves freely, she expresses and represents her opinion, and she dresses as she pleases. Quite normal,” Ahmad explains.

In the next picture, a man lies across and on top of four faceless female bodies. The Koran allows a man to marry four women. But what does a woman who needs to share her husband with others feel? How is it for her when the others are preferred? These are questions that concern Ahmad. The artist consequently reduces women to their mere female bodies. If a man is married to four women, it is not about love, but about sex, as the artist comments on this particular work. Women mutate into tools for the man and are not perceived as persons and human beings with senses, emotions and individual personalities. 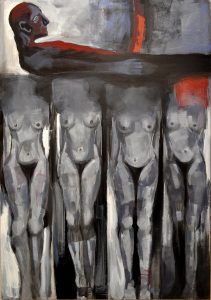 The red cloth with the sword refers to the issue of virginity when marrying, which is still expected of women in many traditional societies. The bed sheet must show traces of blood after the first wedding night. If it does not, the woman is considered dirty and this may even mean death for her. One speaks then of murders committed to avert the family’s shame. They are still widespread throughout the region and are anchored in tribal culture, rather than religion. In contrast, the past life of the man remains a mystery even after the first wedding night. 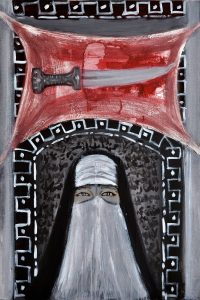 On the occasion of International Women’s Day, the artist wishes women more freedom, a right to freely express their opinions and to be able to live out their personalities. Women should respect men, but not be taken possession of by them. With the socially critical contents of his pictures, the artist Ahmad Nabaz moves on a narrow, sometimes dangerous line and colleagues often advise him against doing so. His credo: “One must be the artist of the time in which one lives.”

About the artist Ahmed Nabaz Taher: He was in Southern Kurdistan in 1986 in the City of Erbil.   He obtained his diploma in Fine Art in 2008, and a BA in in Fine Art in 2012. Ahmed is a professional artist, assistant professor and specialises in painting and  modern art (installation art. photo art. Digital art, video art ,Photo collage media art)

About the author  Regina Tauschek:

Regina Tauschek is born in Austria, she sees herself as a citizen of the world. Her interest in other countries and foreign cultures has become her profession. Regina, who studied sociology and received her doctorate in Social and Economic Sciences, has been working and living overseas for two decades. Her main professional expertise encompasses the management of emergency aid projects. Her stays abroad began in the mid-1990s in war-torn Bosnia, followed by stations around the globe – Myanmar, India, North Korea, Pakistan, Laos, Nigeria, Sierra Leone, Mali, Haiti, Iraq just to name a few. Regina has many hobbies. Photographing and writing are just a few of them.