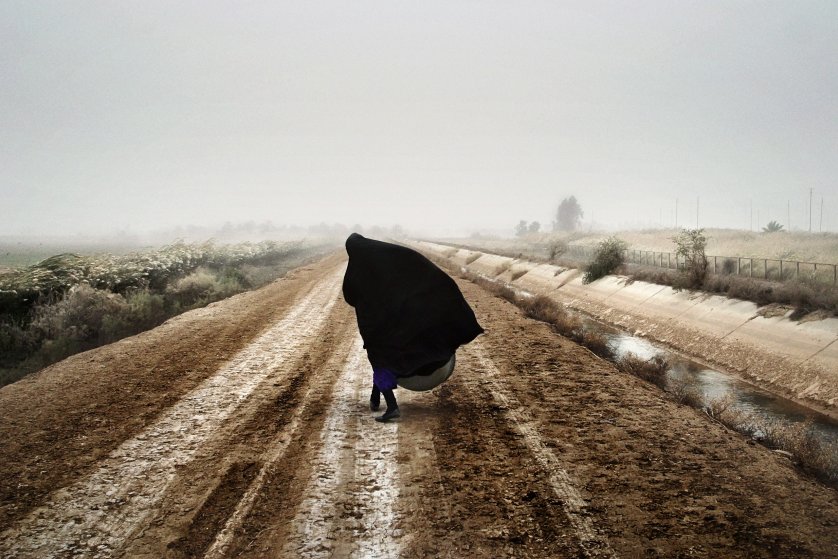 An Iraqi woman walks on a road south of Baghdad, Dec. 20, 2002. Yuri Kozyrev—Noor for TIME

Iraq and rest of humanity

The 2003 bombing of Iraq was supposed to replace the genocidal Baʿth state with democracy. It was supposed to show that humanity matters. Yet, this democratic principle rested on a strategy of warfare claiming that unless the Iraqi people are bombed by the United States and the United Kingdom, they will always be untrustworthy and remain a threat to democracy. It is in this instance – where the division between what is “democracy” contrary to a “dictatorship” –Iraq as a colony, condemned to endless wars, can be noticed.

The political and military invasion of Iraq was as much about “us” and “them,” as about the future control of lands, peoples, politics, and natural resources such as oil. It should be difficult to speak or write about Iraq without having a sense of its modern history. It is a history of colonization and violence. Instructions for American servicemen in Iraq during World War II was published in 1943. In a sense, it was a colonial writing of Iraq, intended to help the American soldiers stationed in Iraq to assist the British to win over “Nazi infiltration.” The American soldier is expected to read the Instructions in order to “understand” the Iraqi people and Iraq so that he does his “best and quickest job of sending Hitler back to where he came from.” Iraq was a British colony. Therefore, Hitler as a transformative political ideology and not as a mortal human body had no right to exist.

As a mode of control, the soldier’s duties involve knowing that “the native language of Iraq is Arabic. You will not need to know many words to get along … The Iraqis have some religious and tribal differences among themselves … The nomads are divided into tribes headed by sheikhs. These leaders are very powerful and should be shown great considerations.” The soldier must remember, “that tall man in the flowing robe you are going to see soon, with whiskers and the long hair, is a first-class fighting man, highly skilled in guerrilla warfare … if he is your friend, he can be a staunch and valuable ally. If he should happen to be your enemy – watch out!”

The Instructions was republished by the University of Chicago Press in 2007. The edition provides a map of the Middle East and depicts the “Arab fighter” in “flowing robe” and a collection of faceless male and entirely covered female figures.

In his Foreword, Lieutenant Colonel John A. Nagl writes “I wish that I had read it before beginning my own yearlong tour in Al Anbar in late 2003.” Nagl contributes with the words “Bad interpreter”: “It always defused rising tension when I was struggling to get my ideas across to a family whose house we were searching at three o’clock in the morning.” Iraq had been turned into a humanity-free military zone.

If the 1943/2007 Instructions solidify the Iraqis as a radically different and easily controllable people, the 2003 conquest turned them into killable and rapeable bodies at the absolute disposal of American and British soldiers and private security companies such as Blackwater.

Moreover, in the BBC documentary film entitled, ‘Who’s Afraid of Machiavelli?’ a former British Army Officer, Colonel Tim Collins, speaks of how during his time in Iraq he rather applied Niccolò Machiavelli’s ‘The Prince’ (written in 1532), as a manual. Collins confesses, “in an occupied village … we could have a curfew and say the first person I catch with a weapon is a dead man and I want all of the weapons handed in tomorrow. And after that anyone caught with a weapon is a dead man and then get all of the weapons handed in. Once all of the weapons are out of the way and they fear your very shadow then we can have a football match.” Machiavelli’s phrase “it is much safer to be feared than loved,” is a shocking demonstration of how the politics of “the democratizing mission” in Iraq followed the same colonizing activities as did “the civilizing mission.”

In order to “democratize”, the “democratic” states had to resort to Shock and Awe. This monopoly of annihilation that opposes the fact that the world “is a crowded place,” as Edward Said insists, produced the Iraqi state as a rogue state and a threat to humanity. As such, it had to be completely destroyed. This classic colonial mode of making oneself heard by unmaking the colonized, implied the complete destruction of national infrastructure, targeted killing of academics, and devastation of national archives and monuments. Abu Ghraib does not only demystify the politics of killing a million and displacing millions of Iraqis for democracy’s sake, or show the complete denial of Geneva Conventions, but remains a testimony to how Iraq and Iraqis live on.

Political violence that depoliticizes the Iraqi civilians has become the mode of governance in Iraq. The Shiite majority rule and ascendency, the reinforcement of “clan” or “tribal” and strict religious belonging, the ascent of corruption, insecurity, poverty, daily violence, and the resultant displacement of hundreds of thousands of people testify to the non-existence of an accountable state in Iraq. The rise of the so-called al-Hashd al-Shaʿbī (popular mobilization force) as a killing machine is transforming what is called the Iraqi federal government into a genocidal force. It is therefore helpful to ask: What does the current genocidal al-Hashd al-Shaʿbī under the rule of Haider al-Abadi hold for human dignity and inalienable civil and political rights in Iraq? Will the survivors of the “Islamic state” and al-Hashd al-Shaʿbī – that has turned Kirkuk, Khanaqin, Tuz Khurmatu, and Sinjar into war zones – ever experience Justice? What kinds of promises do the camps for “internally displaced people” create in Iraq?

The far-reaching politics of Shiitization, ethnicization, and tribalization have gradually led to the formation of a “nation-state” that is engulfed in unaccountable violence. The dream of democracy and statehood in Iraq is shifting toward more violence that entangles Kurdish political parties, the Islamic Republic of Iran, and Turkey. The future that this temporary political friendship between al-Abadi and these two neighboring countries – all with archives of genocidal violence – remains inseparable from past violence. As of now the human condition in Iraq, as Sinan Antoon, narrates in ‘The Baghdad Eucharist’, remains a heart-wrenching story of violence that makes every Iraqi to become frightened of her/his own haunting past. The question is what does this say about rest of humanity?