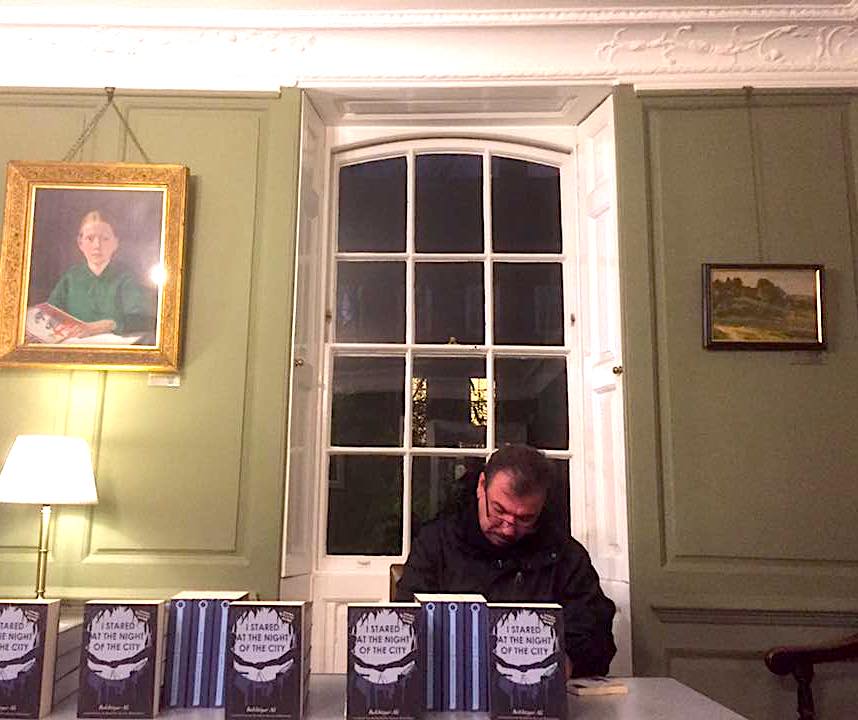 In the evening of 12th of March 2017, Culture Project and Periscope Books co-hosted an event to launch the first ever Kurdish novel translated into and published in English. The event was hosted in Hampstead’s elegant Burgh House, packed with people who are passionate about Kurdish literature and poetry. The event commenced with a welcome speech by Houzan Mahmoud, cofounder of Culture Project, and one of the organisers of the event. Mitch Albert, from Periscope Books, also opened with a speech before chairing a discussion between novelist Bakhtiyar Ali and translator Kareem Abdulrahman.

Bakhtiyar Ali, who is a Kurdish novelist, writer, poet and essayist, has published more than nine novels – as well as publishing an impressive collection of poetry and essays. His epic I Stared at the Night of the City was published autumn 2016. The title of the book in the original Kurdish language is “Ghazalnus and the Gardens of Imagination”, which was translated by Kareem Abdulrahman, who is a Kurdish journalist and translator based in London.

I Stared at the Night of the City is the first major work of contemporary Kurdish literature to be translated into English. In his talk that evening, Bakhtiyar Ali mentioned that nobody has one life, and that “we all lead double lives”. He stressed that “in one life we tackle daily matters”, the mundane, and in the other life “we are only with ourselves or with our own as individuals, as a subject.” Bakhtiyar Ali went on to say that he believed in another vision of life, visions that he is dealing with in his novels. He further added that there is “another vision which is the imaginary vision of my protagonist”, thus explaining why he describes his characters “through their own imaginary life”.

Bakhtiyar Ali’s novels typically detail the dark side of what is known as ‘Kurdish Revolution’. Explaining this, Ali clarified that “the Kurdish revolution in the last fifty years in the South of Kurdistan (i.e. Northern Iraq) wasn’t a revolution or a political vision for the progress of society, women, freedom, democracy, nation, or education”. Rather, as Bakhtiyar Ali went on to point out, it was only an act constituting self-defence; “allowing us to defend ourselves from the Iraqi government which maintained a political program of genocide against us”. He further elaborated that “it was for the defence of bare life”. Bakhtiyar Ali here borrows the term “bare life” from Italian Philosopher Giorgio Agamben.

Bakhtiyar Ali said, “The end of defending bare life was the end of the revolution in our lives, because the revolutionaries didn’t know how to deal with Kurdish society so they turned into corrupt business men and rulers”. He also answered an important question posed by one of the audience members about changing the title of his novel from its original Kurdish into English. He and Mitch Albert explained that the second title came from one of the chapters in the novel itself. Bakhtiyar clarified that there is no “foreign body inside the novel”; rather, it is taken from one of the sentences in the novel. He also said that the original Kurdish title, ‘Ghazalnus and the Gardens of Imagination’ was received in the western world as too fantastical, thus the decision was made to change the title.

Translator Kareem Abdurahman told the audience his story of translating Bakhtiyar Ali’s novel. He said it was a difficult task considering that it was the first attempt ever at translating a Kurdish novel into English. He further elaborated that he had to ask friends, his mother, and other writers to help find a Kurdish equivalent to (what would seem) many untranslatable Kurdish words. Taking into account the lack of Kurdish/English dictionaries and a lack of translated literature from Kurdish into English, the process was a very difficult and lengthy one for Kareem Abdurahman. However, the work was worth the labour.

The evening ended with a reception to celebrate Bakhtiyar Ali and Kareem Abdulrahman, as well as book signings by the author

BAKHTIYAR ALI was born in Sulaymaniyah, Iraqi Kurdistan, in 1966, and currently lives in Cologne, Germany. He is a novelist as well as a literary critic, essayist and poet, and is widely considered to be one of the most prominent Kurdish writers within Kurdistan as well as in the Kurdish diaspora. He has published nine novels and several collections of essays and poetry.

KAREEM ABDULRAHMAN is a translator and journalist. He obtained his MA in Journalism from the University of Westminster and worked for over eight years with the BBC. In 2013, he was awarded a place on the British Centre for Literary Translation’s prestigious mentorship programme. He lives in London.

The book available on Amazon: