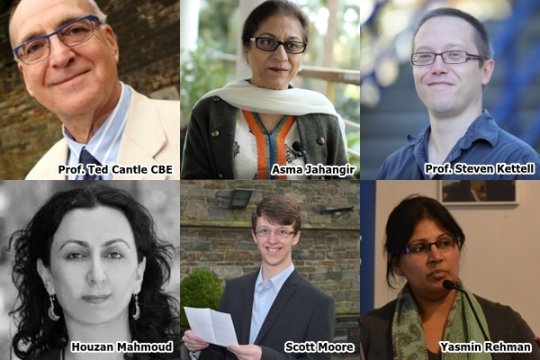 Following nominations from our members and supports, the elected council of management of the National Secular Society selects a shortlist, with the winner due to be announced at the event on 18 March. The six nominees on the shortlist for Secularist of the Year 2017 are:
Professor Steven Kettell, for co-ordinating a secular response to the Commission on Religion and Belief. His work helped rebut calls for more religious privilege, and set out the urgent case for a new secular constitutional settlement in the UK.
Professor Kettell said it was “a great surprise and a genuine honour to be shortlisted for the Secularist of the Year Award.” He said his own research had convinced him that “secularism is the best means of ensuring equal rights and freedoms for all citizens, regardless of their religion or belief.”
Professor Ted Cantle CBE has been nominatedfor his advocacy of integrated education and social cohesion. He has been particularly vocal in his opposition to the Government’s plan to allow a new wave of faith schools free to discriminate in 100% of their admissions.
He said it was “crucial that we support the secular principle of the separation of governance from religious doctrine.”
Asma Jahangir, the former UN Special Rapporteur on Freedom of Religion,for her principled advocacy of universal human rights and her commitment to secular justice. She spent much of her career defending women’s rights, the rights of children and the rights of minorities in Pakistan.
Asma has campaigned against Pakistan’s deadly blasphemy law and has been a vocal proponent of human rights in her home country.
Houzan Mahmoud and the Kurdish Culture project, for their initiative to provide a platform for Kurdish writers, feminists, artists and activists to advance gender equality, freedom and universal rights.
Houzan said, “For the work in activism that I have done for nearly two decades against Islamism and Sharia Law in Kurdistan, Iraq, the UK and beyond, to be recognised by the NSS is one of the greatest honours I could be conferred.”
Scott Moore and Let Pupils Choose, a Northern Ireland Humanists campaign,for challenging compulsory worship and religious privilege in Northern Ireland’s schools.
Scott said “The Let Pupils Choose campaign wants to let over 16s/post-GCSE pupils opt out of collective worship without parental permission. Children of all ages are guaranteed religious freedom under UK, European and international human and children’s rights laws.”
He said he was “very grateful to the NSS for recognising the work I and others have been doing.”
Yasmin Rehman, for her advocacy of a secularist approach to tackling hate crime and promoting the human rights of women. She said, “I am incredibly honoured and humbled to be included in the list of nominees for this award particularly given the work being done across the world by so many brave and courageous people fighting against the hatred and violence being perpetrated by the religious Right of many faiths.”
Terry Sanderson, president of the National Secular Society, said “all of these shortlisted nominees have made worthy and commendable contributions to the secularist cause in the last year and we congratulate all of them on their work and achievements.
“Join me and the rest of the National Secular Society on Saturday 18March where we will name the winner and celebrate their success. All are welcome, and our members benefit from a discount ticket price.”
The prize will be presented by the journalist and activist Yasmin Alibhai-Brown.