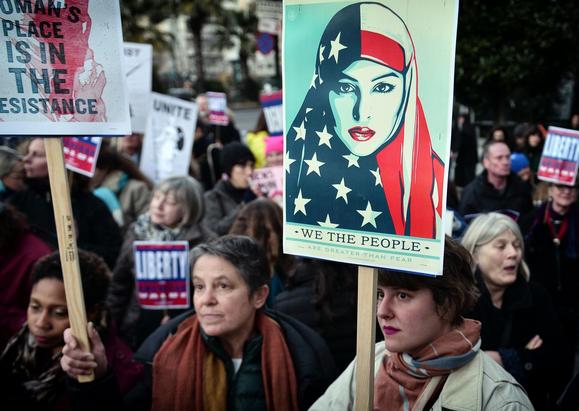 Women hold placards during an demonstration in front of the U.S. embassy in Athens, Greece in solidarity with the Women's March on Washington.

The Populism of the Women’s March in the US

In light of Donald Trump’s controversial inauguration as 45th president of the US, women recently organised themselves into a series of marches in order to show their power and political will. As many of us feminists know, institutionalised sexism, patriarchy, warmongering, racism and class division have finally come to the fore and have become far more visible and out of control during and after Trump’s march to the White House. Therefore, as a feminist, it was a thrilling sight to see millions of well-intentioned women and men taking part in demonstrations in the US and many other countries across the globe to highlight their now-endangered rights as women. Agreeing with many of my fellow feminists, it’s hard not to view President Donald Trump as symbolising the peak of capitalist patriarchy, division and the misogynist culture globally. The difference between Trump and other heads of capitalist states steeped in patriarchy is perhaps the openly expressive manner by which his bigoted ideas circulate – particularly his ideas concerning women, migrants and non-whites generally. Severe class division, privatisation and devastating neoliberal policies now characterise the West in 2017. The newly elected president, a huge driver of such an insidious state of affairs, not only personifies vulgarity, but he personifies both the sexually objectifying and misogynistic attitudes integral to the imperialist project; through the US’ pop culture; the Hollywood movies; and the giant media outlets and corporates that monopolise globally. Reinforced and proliferated ageism, sexism, discrimination and the idea that, as women, we’re not okay by default (thus needing cosmetic surgery to be okay with ourselves) all ratify the fact that the world is becoming dangerously antithetical to feminist ideals.

As women, we all face threats of rape, harassment, killing, poverty, unemployment, war, destruction and terrorism. Opposing the personification of the capitalist regime, President Donald Trump, and the core of his misogynist ideology, requires global action and a resurrection of a free-thinking, universalist set of ideals. Not only that, opposing President Trump is also going to require a global movement to carry such a momentum – one that resists the stumbling block of identity politics and communal division.

Although I admire the bravery of those who marched for women’s rights, I nevertheless feel obliged to publicly declare my criticisms of the 2017 Women’s March in the US.

Making a poster of a veiled Muslim girl as the logo for demonstrations representing the equal status of women is, frankly, bonkers – potentially dangerous. Veiling cannot (and should not) be endorsed as part of female-identity given the fact that millions of women across the Middle East are grotesquely compelled to wear it by force of law and even at gunpoint.

What does parading such a logo represent? It represents restriction, segregation and it’s a stamp of male ownership over not just a woman’s body, but her entire life. Many of us feminists are asking ourselves: how could such a controversial political Islamist symbol become the logo of a march ostensibly motivated by “equality”? Not only that, the dominant discourse of Islamisation was echoed in the speeches of some of the speakers.

Let’s make one thing clear: the veil is a sign of segregation that drives a wedge between women – splitting them between “good” and “bad”. What does this mean? What it means is that those who wear the veil are regarded pure according to the Islamist set of ideals and thus superior to those who don’t wear one (the doomed, the whores, the morally inferior).

Islam, like any other religion, is a personal matter, and should remain so. Millions of people are suffering at the hands of terrorist groups like the Islamic State of Iraq and Syria (ISIS) and those who sympathise with some of their goals in governments across the region. They both control women and their bodies. Furthermore, they control the sexuality of women and their rights through Sharia Law. How could any conscientious feminist call for equality, reproductive rights, abortions, and LGBT rights but fall short in understanding that, within an Islamic context, all of this is banned and utterly condemned? This is a clear contradiction in the goals you set for your otherwise well-intentioned but poorly thought-through demonstration.

For those apologetic of conservative Islam, it should be reminded that when women are forced to wear a veil, it is not only a headscarf that they have to wear – it is also a set of rules and laws they have to abide by. For example, they have to adopt a sexless life outside of marriage; otherwise they commit a crime that is punishable. Furthermore, they cannot have an abortion as it’s strictly forbidden for women to have one owing to the supposed fact that women are baby-making-machines (and it’s against god’s meddling will for them to contravene their inherent purpose in life). They also have to be heterosexual and marry according to Sharia from the age of nine.

One wonders, could such organisers/protesters, as women, personally adopt such an iron- fisted and sexist set of rules? Supposedly representing women en masse in both Africa and the Middle-East, how would the protesters feel if one were to organise a demonstration across the Middle East and say all American women were Christians (and make a nun painted poster as the logo for the demonstration to represent all white women)? They’d be outraged, I imagine.

Well, why then, I ask myself, do these “feminists” accept and promote such generalisations regarding women from our region? Where is the ‘equality’? Is equality only for white women? Are we women from the Middle East supposed to join in thoughtlessly with our chains and different set of backward patriarchal norms imposed on us by men? Is this the only image they have of us i.e. an image of a veiled, oppressed, and modest women who can only worship god? Of course! Why? Because it’s easy to ignore our decades-long struggle for secularism and feminist (universalist) ideals.

As a Kurdish feminist, I feel the strongest of impulses to inform the organisers, speakers and protesters of the unassailable fact that women, all the way from Algeria to Iran, Afghanistan, Kurdistan, Iraq and Tunisia (and many other places) have been fighting Sharia and Islamist codes for aeons. Kurdish women have been at the forefront of the armed fight against Islamism and Sharia Law in order to achieve gender equality, freedom and universal rights. I could not believe my eyes that the platform was supposedly not large enough to highlight their legendary struggle on behalf of humanity against the monstrous dark forces of ISIS. Instead, their platform was dominated by veiled Muslim women paired with the typical rhetoric concerning their glorification of Islam and its identity.

Side-lining and ignoring the struggles of feminists, freethinkers, apostates, secularists and progressives from our region only stems from the protesters’ political populism and their all-too-easy choice of supporting “Muslim veiled woman”. Hundreds of thousands, if not millions, of people in our region are risking their lives in order to rally against Islamisation, a fight that is valiantly taken up and adopted as part of their daily routines, their aspirations and their dreams.

Prisons are full of political activists, feminists and leftists who fight for universal rights. ISIS has already destroyed many places, and they’ve beheaded, killed and enslaved thousands of Yazidi and Christian women who refuse to obey their insidious rules. It is tempting to wonder whether, considering this sensitive time in which ISIS and many other terrorist parties and groups around the world are pushing for more Islamisation, the decision to have a veiled girl as a poster for a demo focussing on women’s rights has somehow marked you as enablers (and complicitous) of an overstretched and successful Islamist campaign? Defending Muslims against racists cannot be achieved through promoting the veil and the Islamist ideology. Not all Muslims are wearing the veil, not all Muslims are Islamists, and not all people who are from our region are Muslims. We have various religions and a lot of amazing people without any religion at all.

It is about time to fortify the struggle for women’s rights and move it into a more universalist based feminist fight – one not solely (or largely) based on internal, communal divisions and one based on identity politics with an inward-looking perspective. Let’s not forget, this dreary division is an outcome of colonialism and capitalist class-division. The rulers are happy to see people obsessed with identity politics instead of mobilising and unifying our struggle on the basis of a common ground under humanist ideals. What is required is an approach that unifies class within a feminist resistance that reifies a vision for human beings that is fair, equal and just. Regardless of our gender, race, religion and sexual orientation, we are all entitled to a world free from all kinds of oppression. We have to be critical of all aspects of women’s oppression, be it religious, class, cultural or political oppression. Cultural-relativism is divisive, and it is a shame on liberals and feminists who endorse the wearing of the veil as a woman’s “right”. Why is it in the 21st century people still believe that wearing the veil, the Burqa and other forms of religious “modesty” are a woman’s right?

Sexual objectification through veiling and unveiling are two sides of the same coin, as they are both imposed by patriarchy – either wanting to own women’s bodies through covering it up, or through the commercialised stripping of women in order to serve the male gaze.

This article was originally published by Conatus News