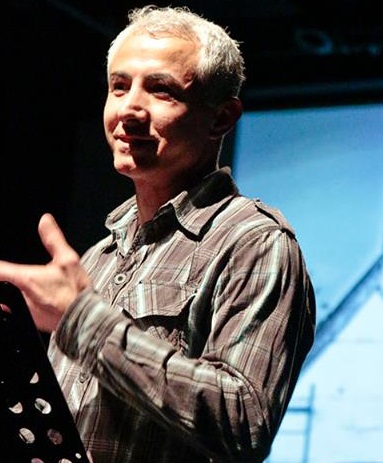 It was still dark when she woke me up that very morning. Fear was showing on her face. She was restless whilst walking back and forth in the room. With one sharp tug she pulled the red satin curtains down and put them in a backpack, a backpack she had previously positioned in the middle of the room. She struggled to close the bag – she must have started packing while I was still sleeping because it seemed half-full.

Outside there was a lot of noise. In the distance I heard loud bangs coming from the billowing-sounding shots fired from afar. It was raining when we stood together in front of the house. Men, women and children were running in various directions in some frantic flurry. They cried, yelled and screamed in fear. Behind us, the whistle of bullets pierced our ears, and there was a distinct splashing sound when they would hit and bounce off nearby concrete walls.

She seemed to be so petrified that she was completely nonplussed concerning the direction we needed to take in order to continue our flight. When a large group of people walked by, she grabbed my hand firmly and pulled me along behind her into the group. Unnoticed, we walked from wall to wall, and advanced silently through the streets of the neighborhood to the edge of the town, where we landed on a narrow, muddy path.

Obedient, we walked behind the people until we reached a different path. Before and behind us, as far as my eyes could reach, I saw a big grey mass of people. In a hurry they rushed by. They appeared to be only concerned with their household belonging which they had taken. The path became increasingly narrow to such a degree that we found ourselves unable to continue walking side by side. On one side of the path there was an imposingly high wall composed of rocks, and on the other side there was a large gaping hole.

She started to walk slowly. I pulled her after me until she screamed that I had to stop. But we could not stop here, it was too dangerous. The others could easily push us down into the ravine because the overflowing anxiety made the group precarious and prone to swift contortions. I grabbed her under her armpit and supported her body with my shoulder. I gently put my hand on hers. She screamed in pain as I pulled her further ahead. We were pushed and pulled from behind. The constant rain had made the path slippery which caused our feet to slip away when we walked by the immense rounding.

The road gaped and I was able to lay her on the side of the road, with her back against the rocks. She grabbed my hand and pulled me towards her. With her big eyes full of fear she proceeded to look at me, and she softly whispered a plea: “Help me, I’m done with it”. Tears mixed with rain drops poured slowly over cheeks and disappeared down her neck. “It’s time,” she said. Her dress was soaked with blood. Powerless, I crouched down onto my knees and looked at her with abject fear.

She pulled her legs up and began to push. She grabbed my hand firmly and started squeezing hard. Suddenly she grabbed my other hand and guided it between her legs. Full of shame I tore myself loose. “There is no time to be ashamed,” she cried in a very loud voice, “you must help me to pull it out because I have no strength to do it myself!”. With a lot of fear and full of shame I put my hands between her legs, but refused to look. Suddenly I felt the head of the child. “Pull it out when I begin to push,” she said . There were many people walking around us, but no one was watching us. Due to the hard rain and fear that seemed to blurred the reality of the situation, I did not have  the strength to help her. With all the strength in her body and a shout of salvation she pushed the little child out.

There I stood, my hands full of blood and a slippery baby that I had almost dropped on the floor. I lifted the little baby and placed it on her chest. Behind us I saw a group of men and women who shamelessly bent over us to look. I grabbed the red satin curtain out of the backpack and laid it down over her and the child. “What is it?” Asked one of the men. “A boy or a girl?” Excited, the other men and women repeated the question. “A girl,” I said, relieved. They began to turn their heads  away and advanced quickly into the other direction.

With a small pair of nail-scissors, we cut the umbilical cord. At first, the child was quiet, it did not make a sound, but at the moment when she came loose of her she suddenly began to cry loudly. “We leave it here,” she said in a panic, “we throw the curtain over her and let it be here.” Then, with her hand in an urgent manner, she stuck her nipple into the mouth of the child. They both became silent. Full of love, she glanced at the child and the child stared at her. In the backpack, I found a plastic tablecloth, I unfolded it and threw it over them.

I quietly stood in the pouring rain and stared at the people I saw walking by. The number of people passing increasingly burgeoned. However, a new sort of people started to pass. These people were not dragging large TVs, cabinets, CD players and backpacks unlike the others. Instead, they all wore neat and very clean clothing. I recognised many of them. I recognised my neighbors and even my grandfather. I saw all the women and children, who at the time had been with us in the camp. All the soldiers who had guarded us day and night in the camp passed us – but now without their guns and helmets. They walked consecutively past me and smiled. The two men who had taken my father away from us and never brought him back walked past me with their heads low. Among all those people, I also recognized the faces of the men who, during one harrowing evening, had crept into our tent and crawled under the blanket with my mother. In the distance, I saw my mother and father walking, their arms entwined. Tenderly, he lifted the child into his arms. They both looked at me with smiles on their faces. They walked past me. I threw my arms into the air and I tried to call out to them, but there was no sound.

I let myself fall down on my knees and crawled away under the tablecloth. Quietly, I placed my head on my mother’s chest, and with both hands I held the plastic tablecloth above us tightly.

Houzan Mahmoud in an interview for Conatus News