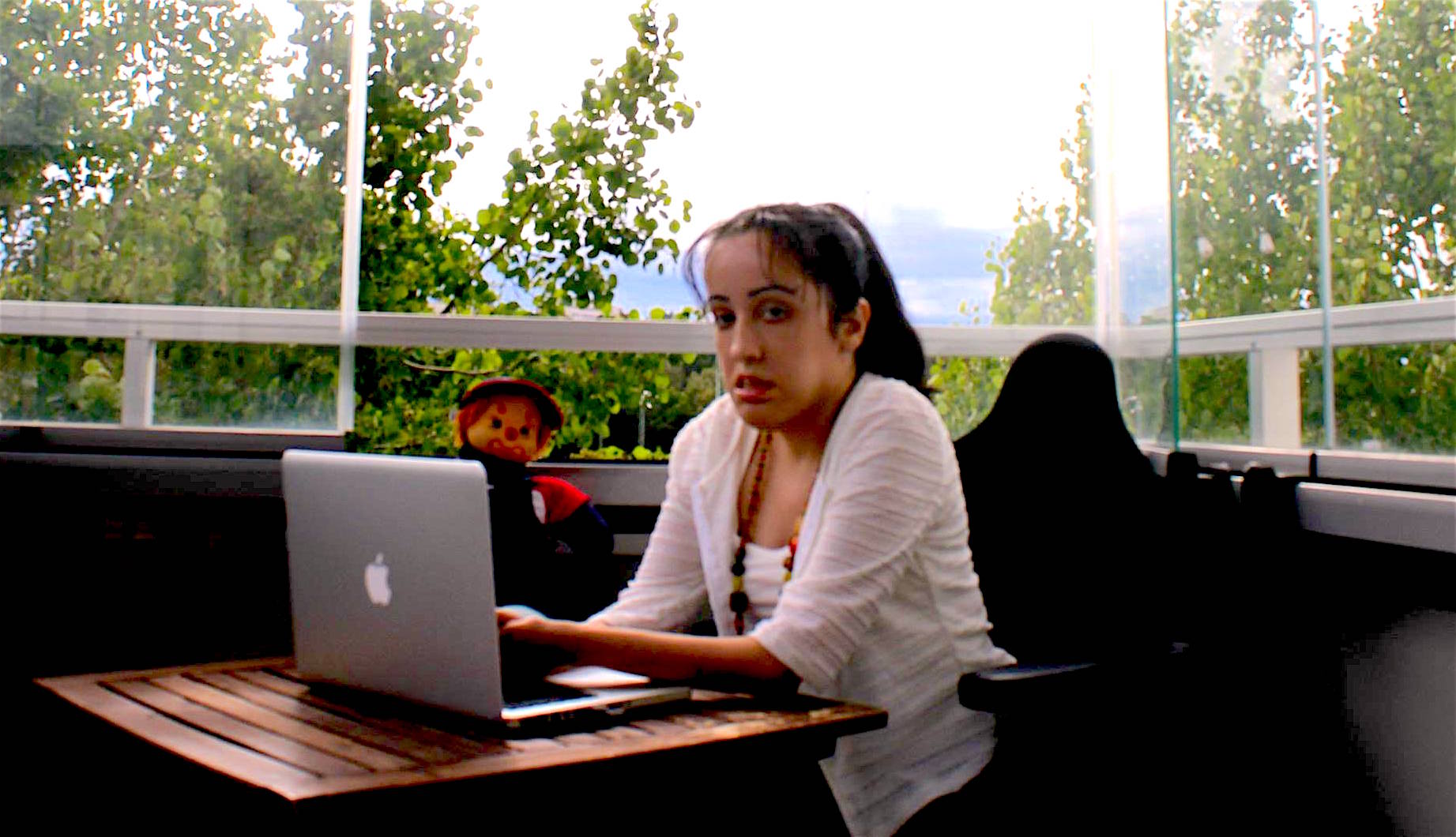 This is the first time I have ever written about myself. It feels harder than doing any other form of writing, but the companion who usually reassures me and shares the burden with me is my cloth doll. He has been my friend for over twenty-five years and is familiar with all the incidents that I need to bring to mind now. As a child, I had several pretty dolls. What made me keep this doll is a mystery I haven’t yet figured out.

When I was about to start elementary school, I was supposed to have my leg operated on, but I refused. To get me to agree, my parents promised me toys and pretty things. They were telling me that refusing the operation would hurt me a lot and that I just had to stand it. However, it was as though I wouldn’t trade anything for the pain, not at any price, even if it meant my leg would recover.

There was a doll hung decoratively in my grandfather’s house. It always drew my attention. It was a circus hero, and his face was designed in such a way that this doll seemed always to smile at you. He had a cone-shaped hat and a colourful coverall. He was dressed to make children smile. With such makeup and clothes, he seemed comical, but I noticed a deep sorrow in his eyes that filled my young imagination. He made me feel I could enjoy myself and also cry along with him. Amid all this, my grandmother said, “If you have the operation, I will give you that doll!” Without hesitation, I agreed.

The operation wasn’t successful, but it didn’t matter to me because I now had him, the doll – and I had gone through agony for him.

The first book I read in school was a novel by Samad Behrangi called Ulduz and the Talking Doll. Every night, I would use Ulduz’s words to say to my doll, “Hey, my doll, speak to me or I will explode in anger!” Obviously, my doll never spoke as Ulduz’s doll did, but he was a living listener and we shared many secrets, joys and life hurdles. Many nights we spoke together until dawn, chasing our wishes and hopes.

As a child, I suffered from ill health. To tell the truth, I had a sort of rare weakness of my muscles that is undiagnosed to this day. What is known about it is that my muscle cells slowly die and my organs become weaker. No one knows why, so it is impossible to treat.

When I was in elementary school, people criticized my mother. They thought schooling would make me tired and asked my mother what she thought me to grow up to become. My mother refused to see me as an invalid and she harboured many hopes for me. One day, I asked her what she wanted me to become.

“An important author,” she replied.

I was shocked and unhappy. At the same time, I thought that regardless of whether she thought being an author was ‘important’, she’d set her sights on an easy job for me, one that didn’t need physical labour.

We had a fabulous bookshelf at home, my mother was the careful reader, she worked in the library. My father wrote poems and bought lots of books and newspapers. One day he returned home with a children’s magazine, Govari Papulay Mindalan (Children’s Butterfly Magazine). He said children could get what they wrote published in it. I started reading it and a few days later wrote some prose and gave it to him to take to the magazine. He was excited and congratulated me. When he returned, he said that unfortunately, it hadn’t been approved.

“They said it doesn’t look like it was written by a child, that an adult might have written it.”

“But I wrote it myself and you should have told them so,” I complained.

He had told them, he reassured me, but they hadn’t believed him. Instead, I should write another one that was closer to the standards the magazine was used to.  After that, I gave up writing and thought I wouldn’t go back to it again.

To tell the truth, I rather liked arts. I dreamed of many art forms and had a passion for most of them, for instance, painting, ballet, theatre acting, violin, and piano. But my illness and my weak body stopped me from doing any of these. After resigning myself to this fate, it took me a few years to figure out what I should do.

I was in middle school when we got out of Kurdistan and resettled in Sweden. Although I enjoyed the science lessons, I chose to focus on literature in high school. Later I studied design and graphics for one year in Linus University before dropping out because my health had deteriorated.

A few years before studying at the university, I contributed to several projects conducted by the Kurdish Zanistperweran Group. One was starting an online dictionary in Kurdish for Information Technology, which was later printed as a book. I wrote my first story in 2003 entitled “The Crying Eyes Laughed” and went on to write several more stories printed in 2006 under the title, A Letter to Heaven. Earlier, I’d translated a Swedish book for small children into Kurdish called Smart Anika. Slowly, I was drawn to writing but, like a broken-hearted lover, I felt like answering the call only once in a while. Often I spurned it.

In 2012 my second collection of stories, A Dusty Day, was published. A year later I translated a Swedish book, Why does the Grass Grow? into Kurdish. It included a collection of lessons drawn from real-life events and also was recorded as an audiobook.

At that time the universe unfolded and revealed to me another one of its great colours – the feeling of love. It seemed the answer to all my questions. My love and I married. Being together is not our only happiness in life but we are soul-mates and feel clearer and more empowered. I’ve since started a bachelor ́s programme in performance studies with specialisation in dramaturgy and performance criticismat Stockholm University, firm in the knowledge that I want to continue writing.

The first day I found myself in a large classroom in the university, I recalled all the stages of my education. I felt a sort of humility as I heard once again voices from my past intoning that I would fail in life – that I couldn’t succeed. At the same time, I felt the eyes of those who believed in me and the touch of my older brother as he led me to elementary school, my bag in one of his hands and his other hand grasping mine firmly. I pictured the playground at Mahwi School and my little brother, so determined to outdo me for the highest grades. I wandered back in my thoughts to those days at Zhin High School for Girls when I leant on my lovely sister to balance myself.

It was as if the memories had been perfectly trapped in my head, even the smallest event. The memories tumbled and sped through my mind, from the first day of elementary school right up to the day when I went with my husband to enrol in the university and to the moment right then in that hall when a Swedish-German professor was about to teach us. I remembered the faces of my teachers, my classmates – the friendly and the unfriendly – like a film. I remembered the nights before the exams, the times when ill, when I studied, was joyful – everything from my past. I was so happy to study performance studies and performance criticismand was determined to write and to read everything I could.

In 2015,a collection of my new stories and some old ones I’d written were published in a book called I Have To Tell Something. Then in 2016, I translated all the plays of the British playwright, Sarah Kane, into a book that will be published on World Theatre Day. Nowadays, in addition to some projects for the future, I am writing analyzes, articles and also doing translations.Had it not been for my determination to write for this exciting new magazine, I wouldn’t have written at all about my life. However, it’s been helpful to take a look at myself, so I’m grateful.

Unfortunately, my health isn’t getting any better. My muscles are weak and so is my voice. Sleep comes only when I’m hooked up to a machine to help me breathe. I need a wheelchair to get about, and My hand can’t even hold a pen … Still, I am okay, and I wish for hope to light everyone’s soul.

As I write this on my computer, my doll is next to me. I must admit he doesn’t look like a circus actor anymore.  He’s changed his clothes and instead of his conical hat, he wears a cap. He’s got a red and white blouse on and a blue-jeans coverall instead of his colourful striped one. Still, my doll’s face has the same old look, never mind the scratches, and behind those eyes and that smile is the same deep sorrow …

Kurdish Women As a Disciplined Body